I had thought that by going to bed earlier last night, I’d wake up earlier and get out for my “around the island” run this morning, but it didn’t work out that at all… in fact, I slept in for longer than usual and Ian was up before me!  I booted him out for his run first, just as Cornelia woke up, then when he returned, I went out, leaving him in charge of breakfast.

It was really windy out, and the sand was being blown from the beach, so I was covered in sand almost immediately, before heading for the safety cover of the trees.  I then managed to find a route, mostly on gravel or sandy track, all the way around the island, and amazingly, I didn’t get lost once!  Running in a circle, rather than a straight line is obviously easier for me….  I had a really enjoyable run and can feel my fitness coming back to me a little bit more every day. 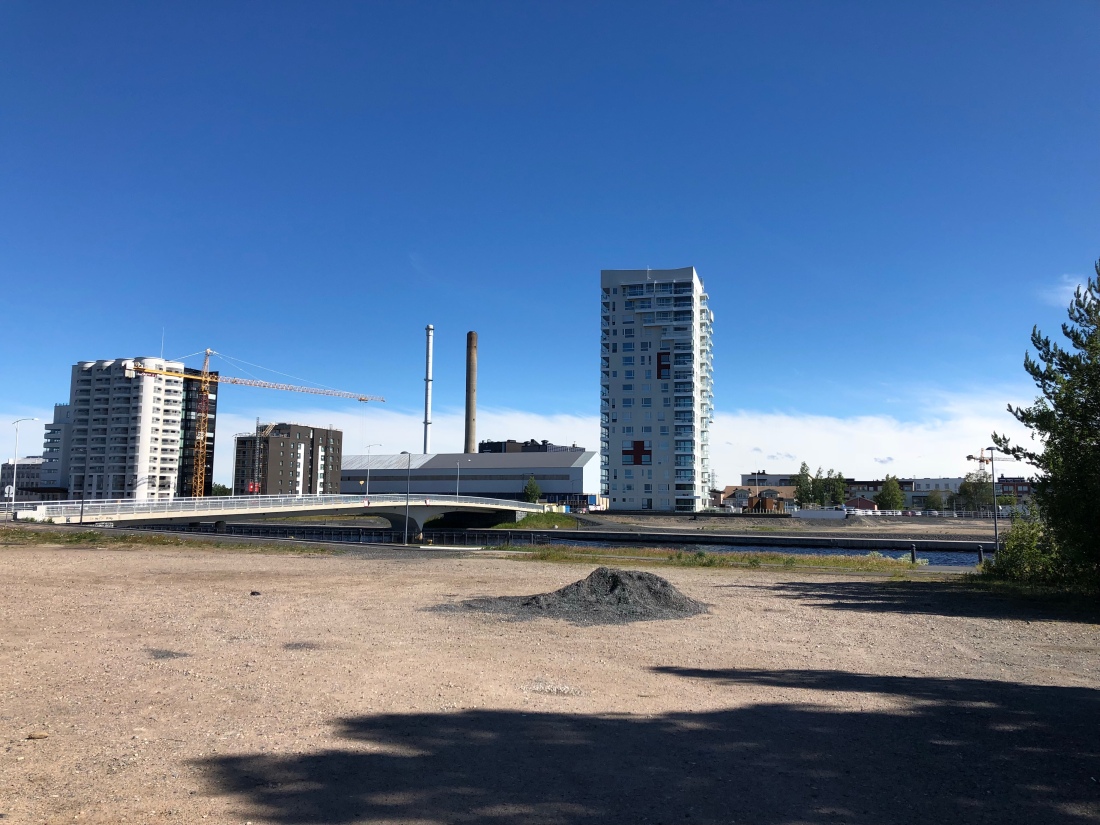 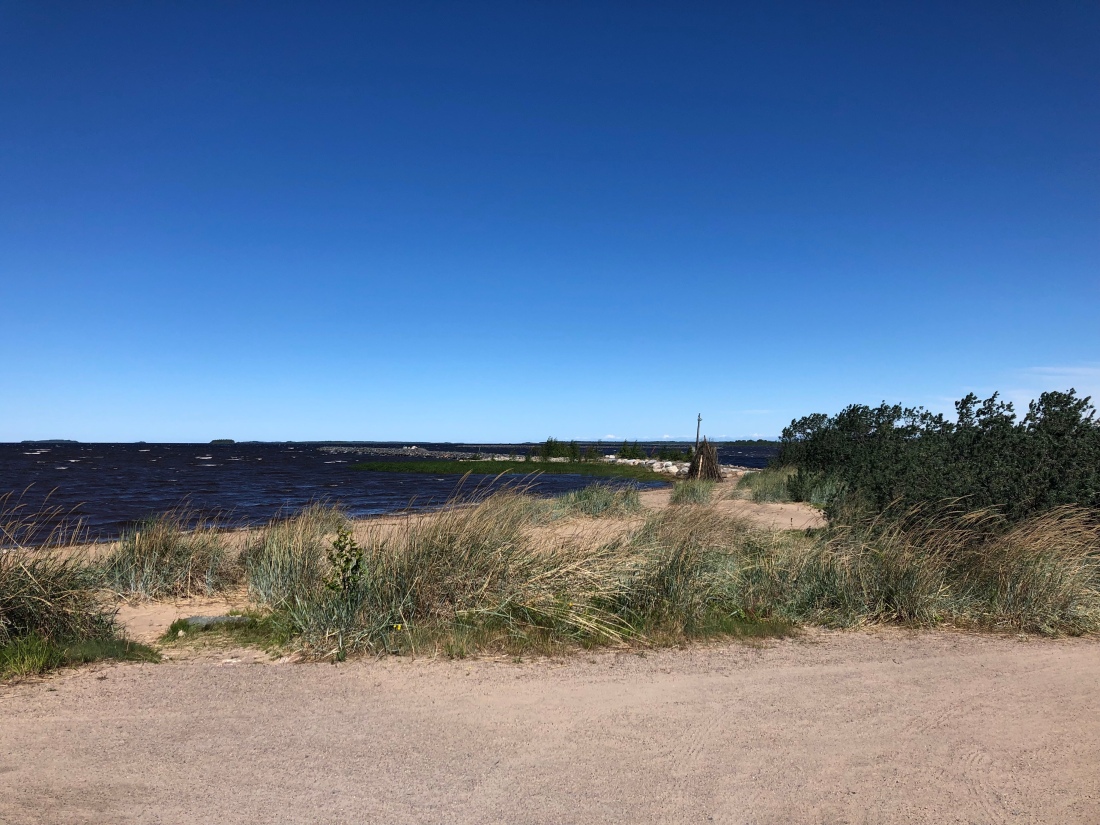 The route was, unfortunately, a little shorter than I had hoped (4 miles, instead of 6-7 miles), so I asked Bugsy if she wanted to come out with me on her bike which, of course, she did.  She said she would just like to do a mile this time, so that’s exactly what we did together, and I loved it as much as I did yesterday.  She said to me “We could do this every day if you like, Mummy!” and yes, Mummy likes that idea very much!

It was the usual rush to pack up when we got back, not helped by a toddler who just wanted to play (which is fair enough!).  I had to have a shower first, then I made sandwiches and packed up the boxes while Ian ferried them into Bluebell. We left slightly later than planned, as always, but made good time to Rovaniemi, arriving around 15:15.

It was a beautiful drive here, again along easy roads, surrounded by forests and lakes.  We barely saw another car for about an hour of the drive. 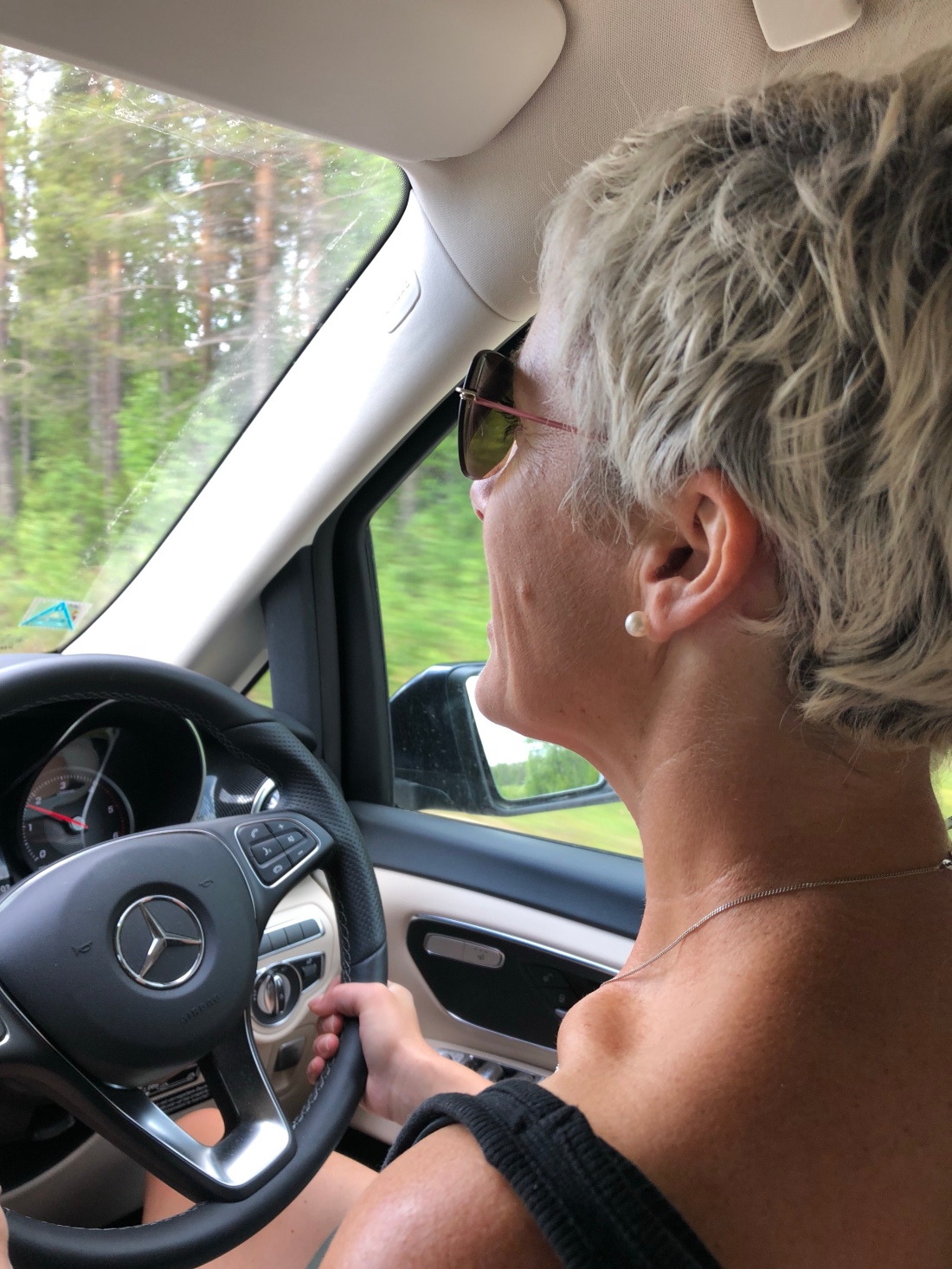 Rovaniemi is the capital of Lapland, the home of Santa Claus.  It is about four kilometres from the Arctic Circle.  Tomorrow, we are doing all of it!  Ian has been preparing for some money to be spent…!

Our apartment here is terrific – two big bedrooms and a huge open plan kitchen/diner/ lounge. It even has its own sauna!  Unfortunately, the downside is that some creature appears to have died in the drain of the shower, so the bathroom (and sauna attached to it) absolutely stink!  Someone is coming out tomorrow to clear it all, but in the meantime, it’s pretty bloody hideous.  The owner was deeply apologetic, and of course, it’s not his fault, but that’s the only thing that stops this from being the perfect apartment. 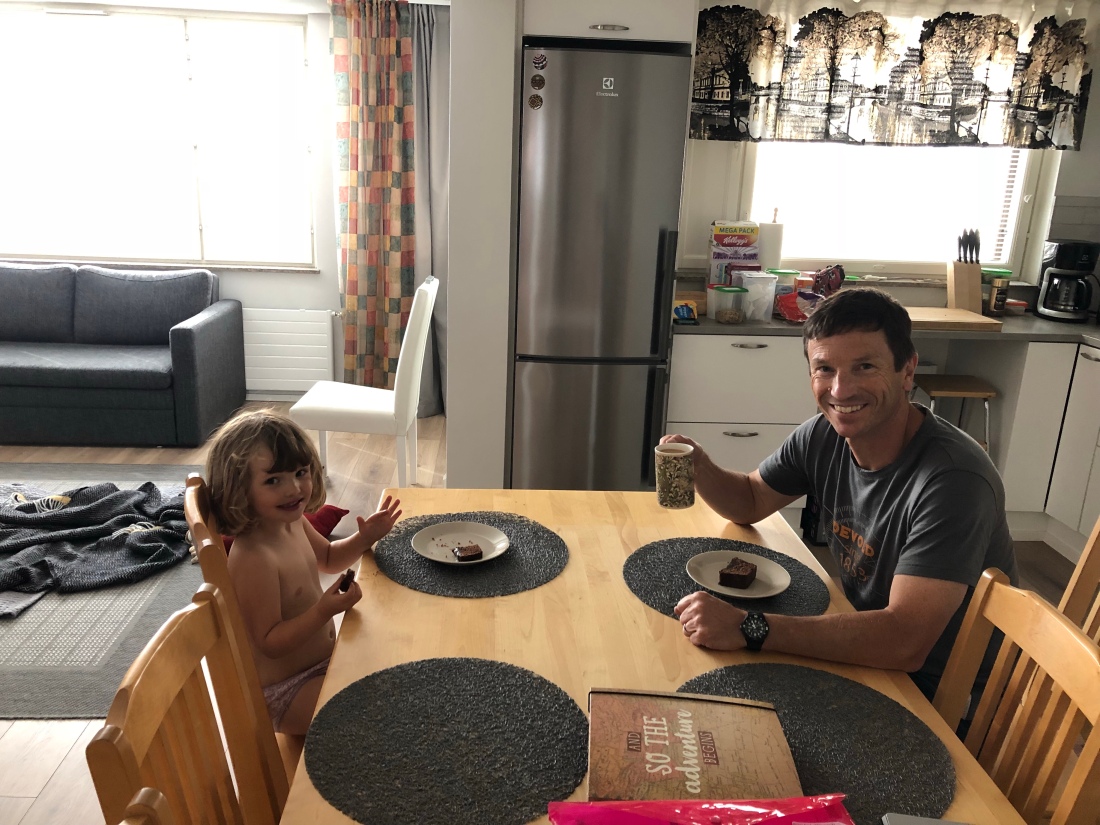 It’s Matthew’s 21st birthday today, so we were able to have a chat with him for a while, and are looking forward to seeing him next weekend when we are home.  Neither of us can believe he’s 21 already!  Argh!

When we finished our conversation with Matthew, we unpacked and played the treasure hunt game with Cornelia, then went out for a quick trip to the supermarket.  The shopping centre had travelators that Bugsy was keen to have a go on, so I started the shop, while Ian took her up and down a couple of times!  It was a really nice supermarket – decent fresh fruit, vegetables and meat, so Cornelia had a super healthy supper of chicken breast, boiled potatoes and broccoli, and Ian & I had chicken pad thai.  And chocolate.  And beer.  Yum! 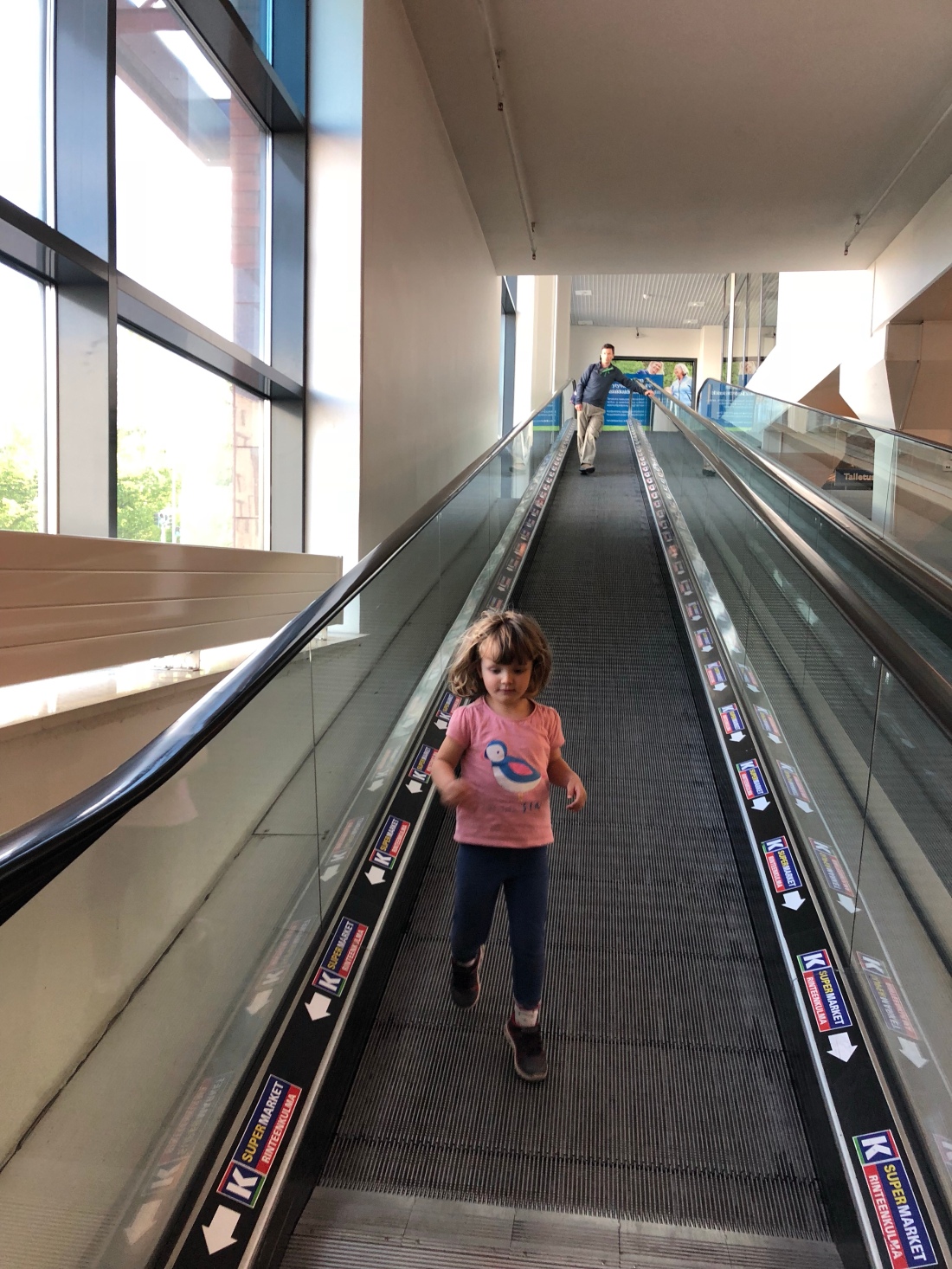 Time was ticking away, as it seems to quite quickly, and the promise of a trip to the Moomin Cafe for hot chocolate, and a visit to Santa Claus has meant that Cornelia’s behaviour has been almost impeccable this evening.  She is really excited about tomorrow, bless her!  (And actually, so am I!) 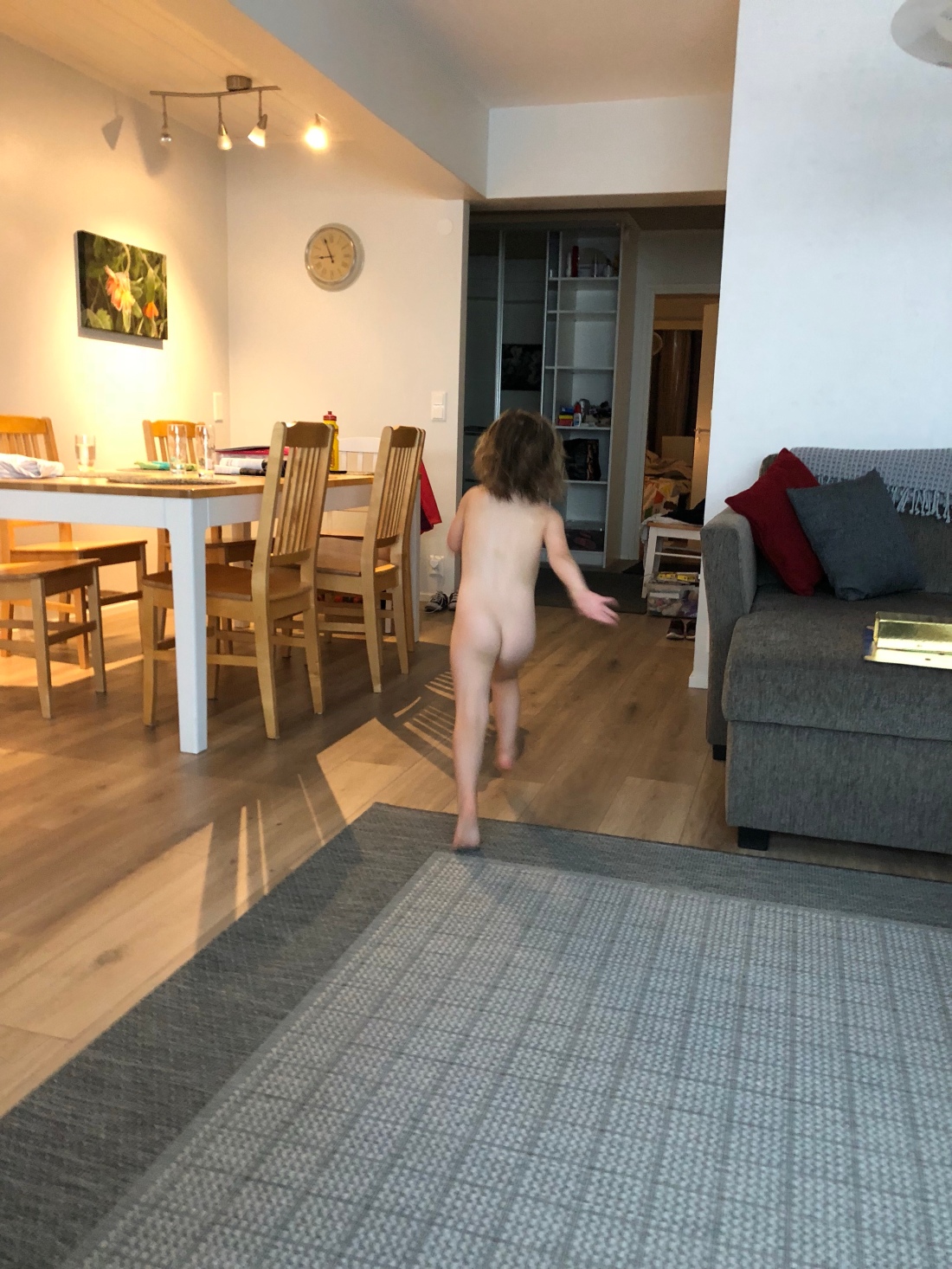