Staying true to the cliché that all good things must come to an end, so has our long spell of warm, dry sunshine now ended.  The forecast was completely correct informing us that there was 100% chance of rain today!  But, as I’ve always said to Cornelia “Everything’s washable, everything’s dryable – including your skin!” so she didn’t mind the rain in the slightest.

The day started off perfectly, with a cuddle in bed with a happy toddler.  After a quick breakfast, all three of us were ready to head outside into the gloomy morning.  And what an amazing hour we had!  Cornelia went on her bike (she has named it “Henry”!!) while Ian and I ran next to her.  This is something I have waited for patiently and never expected it to come so soon, and am just so joyful that we are able to do this together now.  She will be my inspiration and motivation to run, if she is cycling next to me.  I am so excited for the positive change this will be for all of us. 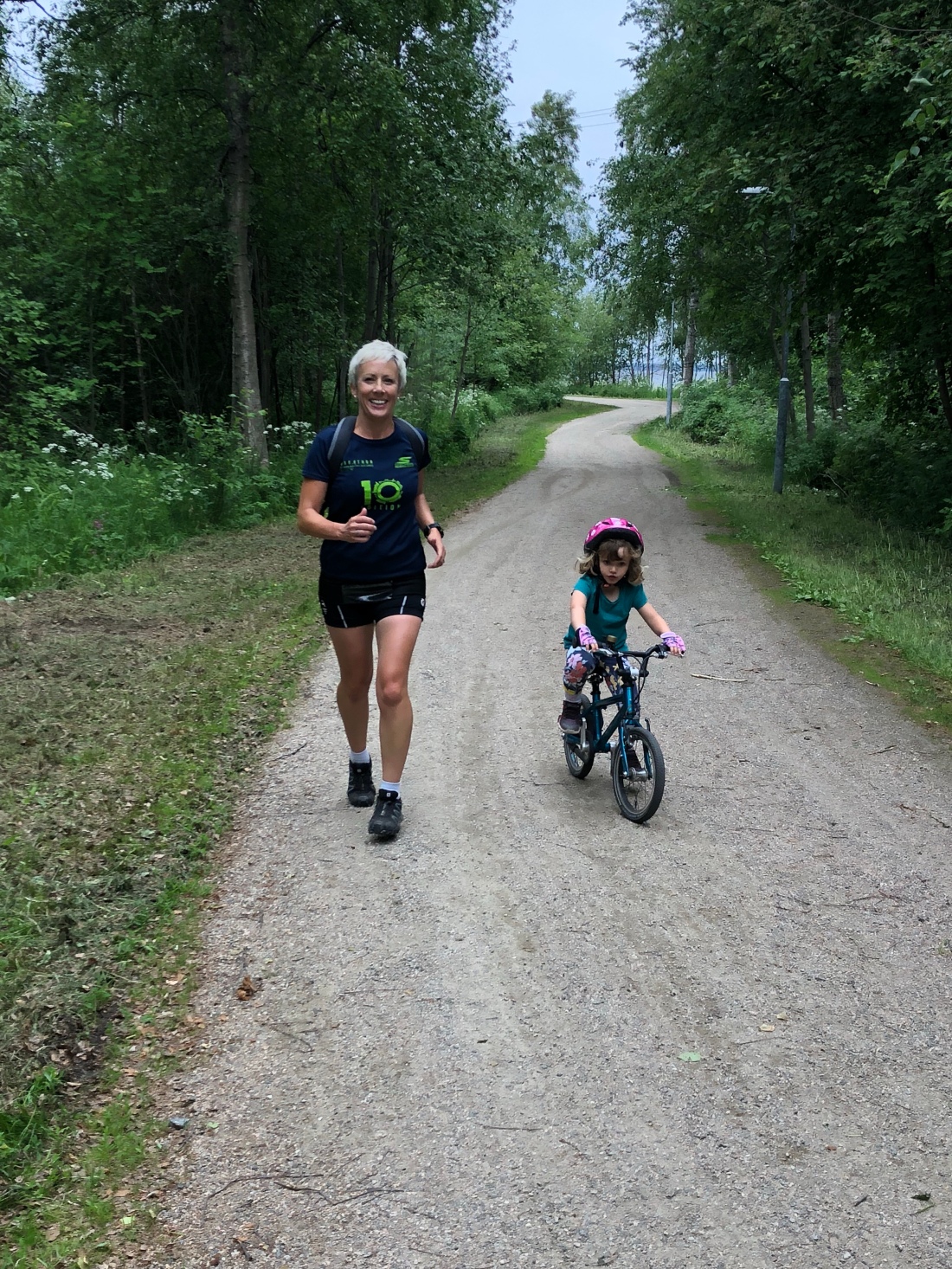 We ran/cycled for just under two and half miles in total.  I had to stop for a erm…. call of nature… which was awkward, given that we were on a bike path that weaved in and out of the trees, but thankfully, a) no-one came past and b) no mosquitoes ate my backside this time!

Cornelia accidentally cycled into the back of Ian’s leg, which was slightly traumatic (for Ian) but he soldiered on bravely.  After that, we were more conscious of her being behind us, and encouraged her to be a little further in front of us instead, which resulted in a bit of unexpected sprint work!  I can’t believe she cycled so far without complaining!  She stopped a couple of times to shake off her hands, but that was it.  We were all beaming from ear to ear when we arrived back at the lodge.

Although it was now raining outside, we decided to wander down to the nearby lighthouse to have a look at it.  Bugsy was keen to cycle there again, so we bundled up with raincoats and off we went again.  It is much cooler than recent weeks (13º instead of 26º!) and I could really feel the chilly wind on my legs as we climbed the steps to the top of the lighthouse.  I thought one benefit to cooler weather might be fewer mosquitoes, but there were swarms of them swirling around the steps.  So, we didn’t stay there for very long! 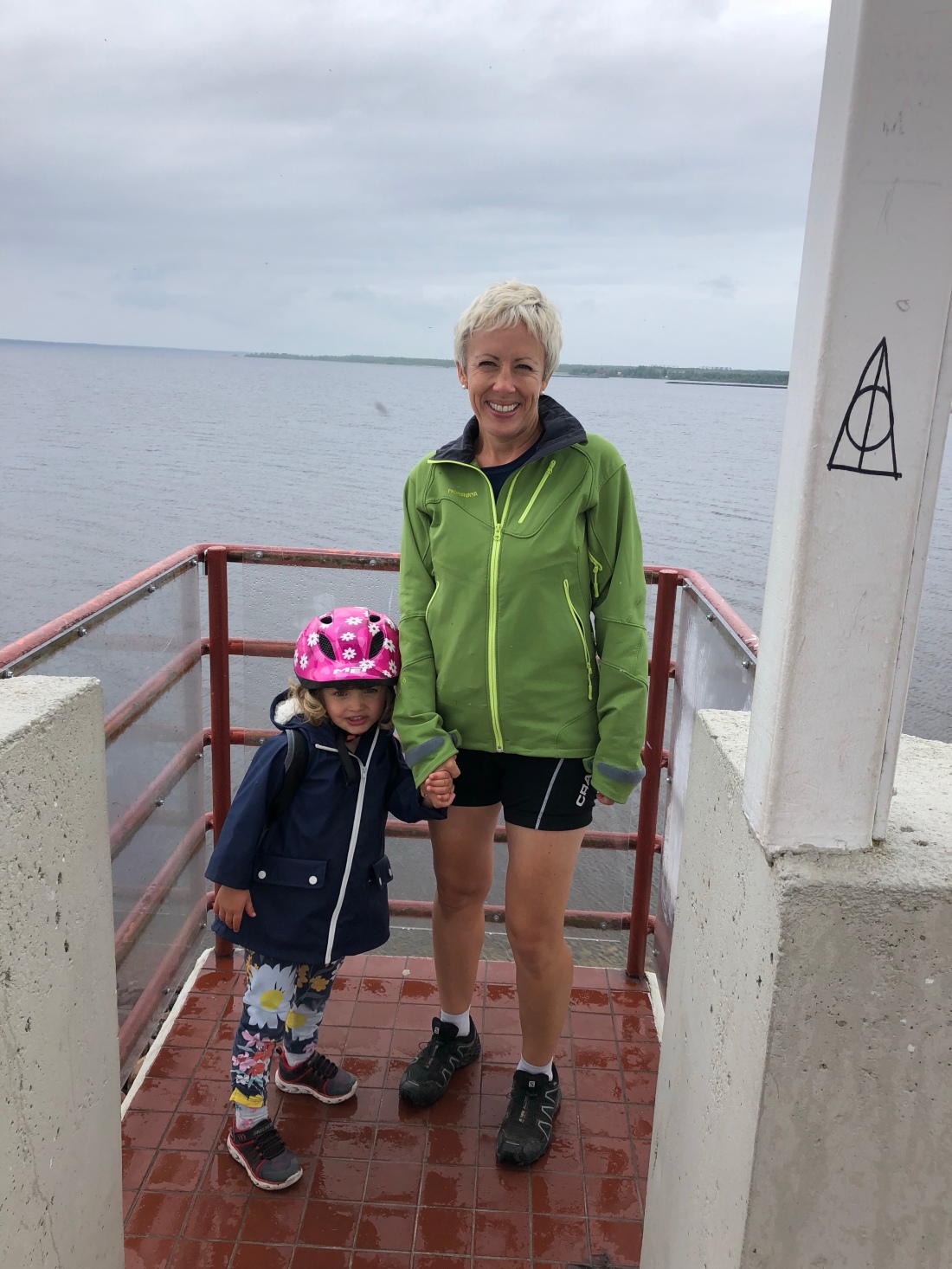 We felt hilariously British in our raincoats and shorts in the pouring rain, especially as we then went to the beach so Cornelia could make sandcastles.  Of course, she doesn’t care if it’s wet or dry, as long as it’s sandy and she has a bucket & spade. 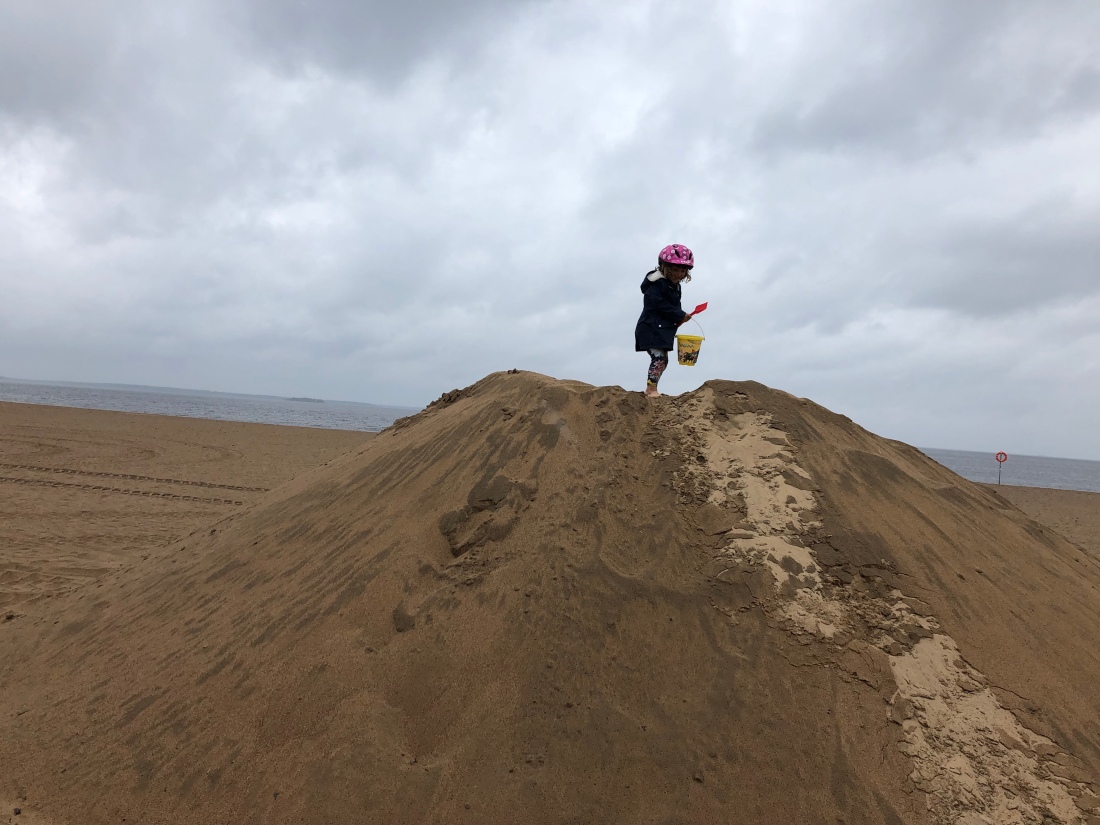 I offered to go back and make lunch for everyone (so good of me, I know!) and enjoyed a luxurious, warming shower in peace and quiet, before the other two came back.  We rinsed her off quickly to de-sand her, then all had lunch together.

We didn’t really know what to do in the afternoon, and hadn’t really researched things to do in the area, so we ended up driving to one of the local shopping centres and playing on the escalators for 45 minutes, before heading back!  We did look in a couple of stores, but everything is so much more expensive here than in England that even I didn’t want to buy anything!

We spent the rest of the afternoon doing our own thing – Bugsy had her one hour of Kindle time, and watched Peter Rabbit non-stop for the whole time, Ian caught up on the football, and I am not really sure what I did – caught up on Facebook, I suppose – and then made dinner, which was a bit chaotic as I was trying to make two omelettes, boil pasta and boil potatoes at the same time, in a very small space.  Amazingly, I didn’t drop anything, and we all enjoyed eating together again.  I have to say, this is something I’ve longed for over the years – for us to eat together as a family – but Ian is always home way too late for Cornelia, so of all things I’m really appreciating on this trip, this is one of my favourites.

Ian took her off for her shower after supper, then I read “The Wild Swans” to her on the sofa, before she went off to bed.  Just before she climbed up her ladder to her loft bed, she dashed over to me, dropped onto one knee, and asked me to marry her.  (I said “Yes”, of course.)