Cornelia woke up quite excited as it is Cousin Izzie’s 6th birthday today, and she asked to send her a Happy Birthday video before she’d even got her clothes on.  I got a respite from making porridge as everyone opted for a different breakfast today, and having thought Bugsy was looking a little skinnier than usual, gave her two Weetabix which she happily scoffed.  I think she’s getting even more exercise than she did at home, despite the days with long car journeys and disproportionate amount of chocolate ice creams, so I am trying to ensure that she eats enough decent food.  Anyway, two Weetabix and a yoghurt gave her enough energy to trundle all the way to the tram station, a short distance away from our apartment.

She was excited to be on another tram, and this time even had her own individual seat. The journey into Central Riga was pleasant enough, through a park and over the River Daugava, and Ian used good old Google Maps to work out where we needed to get off in order to be near Riga Cathedral. Cornelia was more excited by the Hop On Hop Off buses and the City Guide electric buggies than walking to the Cathedral, of course, but luckily a three-piece traditional Latvian band started playing, so she was off dancing straightaway! 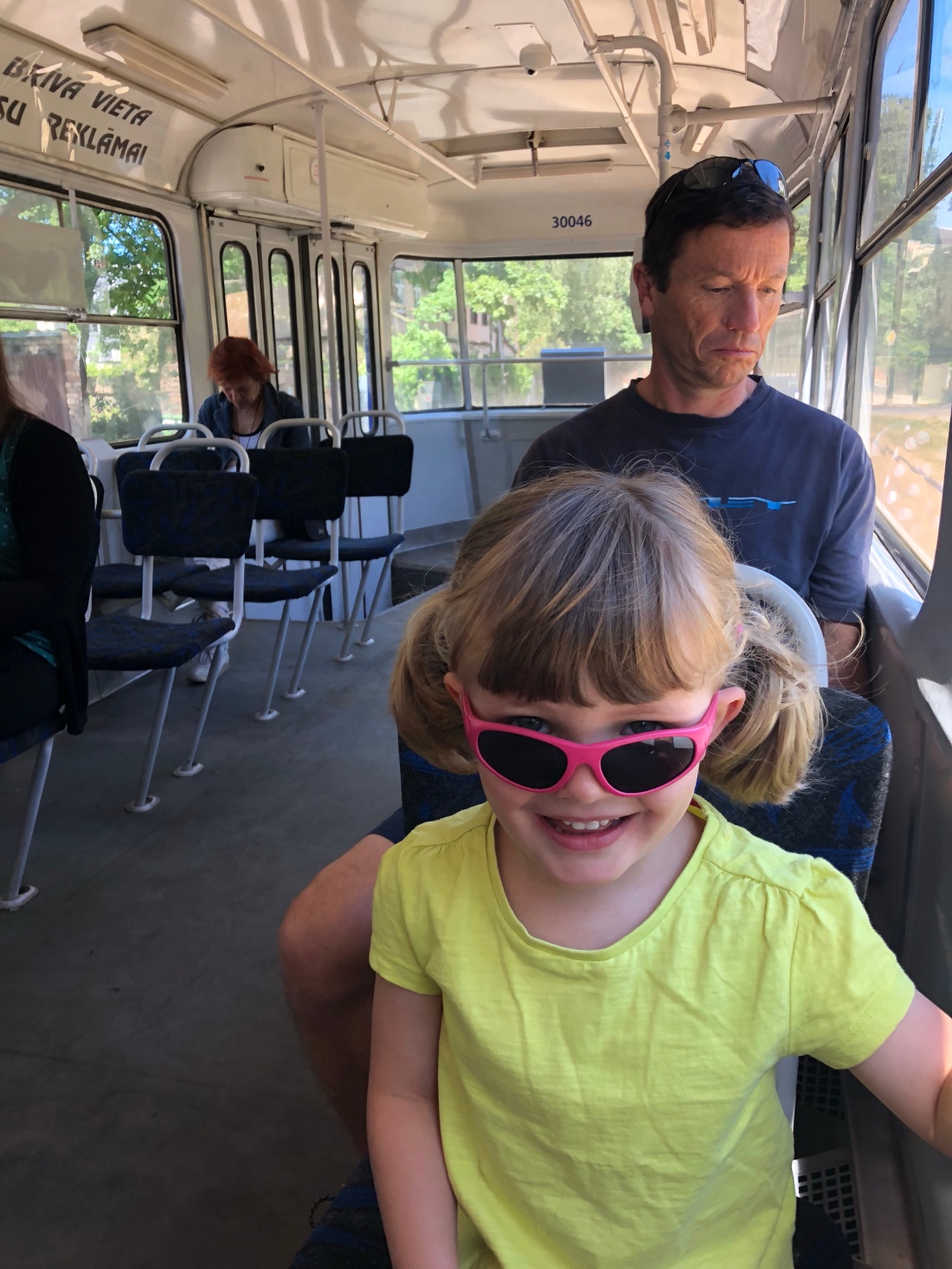 We managed to dance her all the way out of the square (away from the buses!) and off to the Cathedral, which was close by, as Google Maps had promised.  We approached from one side of the Cathedral, which had the most peculiar playground next to it. It was devoid of all play equipment, bar a roundabout, and three metal animal sculptures: an armadillo, an owl and a unicorn!

She had a good spin on the roundabout, before she found some pigeons to chase, and finally we entered the Cathedral (with a 3€ entry fee per person).  Most of the inside had been stripped away in the 16th Century during the Reformation, but there were a few exceptional pieces there. Firstly, the stained glass windows were really interesting.  I couldn’t quite work out which stories were being told, but Ian did spot one child in the window, who he thought looked a bit like Cornelia! 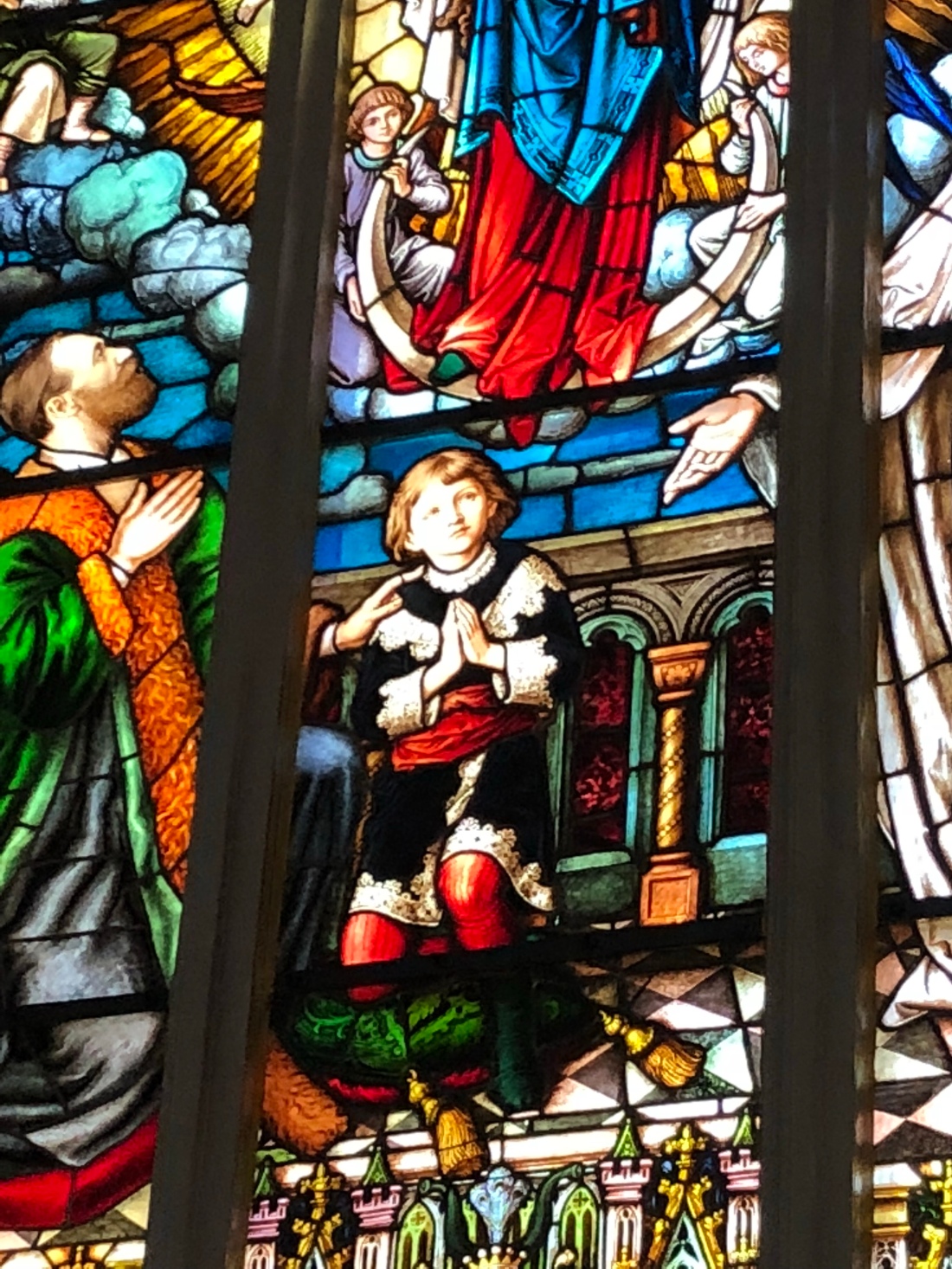 Then there was the huge wooden pulpit, carved hundreds of years ago, depicting Jesus and the Twelve Apostles, and which was remarkably well-preserved.  There is a massive intricately-decorated organ and the original Baptism font, made of granite from the 12th Century, and last but by no means least, the enormous copper weather cockerel was on display, which had spent the last 400 years on the top of the Cathedral but has now been replaced by a newer version. 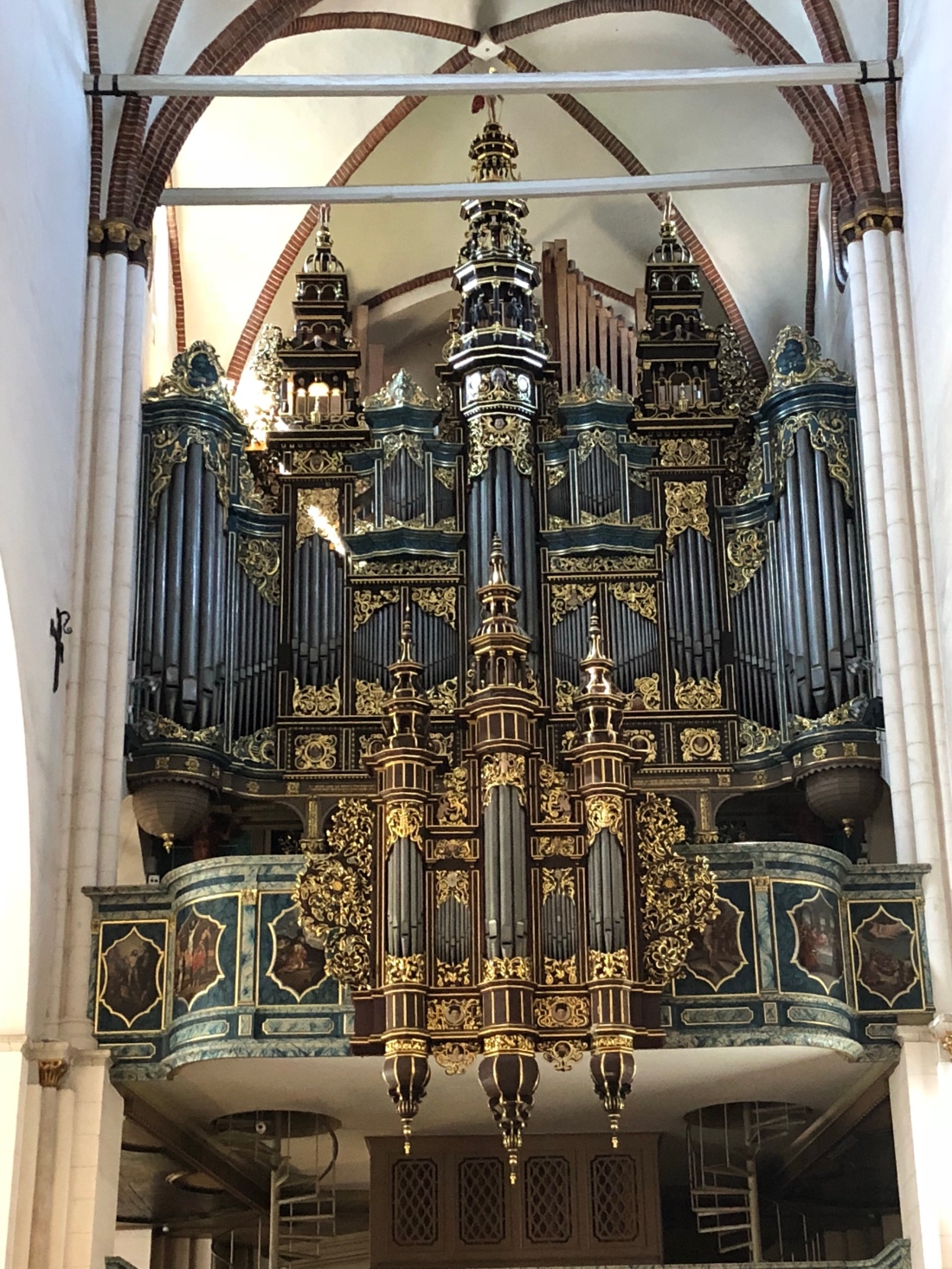 We wandered down to the Cloisters too, which had various relics from Riga’s history littered around its edges, such as cannons and old gates.  A bit random, but it really sparked Cornelia’s interest, and one chap came over to tell me how delightfully inquisitive she is!

We then spoilt it all by suggesting she stroked the stone lion, and then we roared, scaring her so much that she burst into tears, which wasn’t the reaction either of us had anticipated! 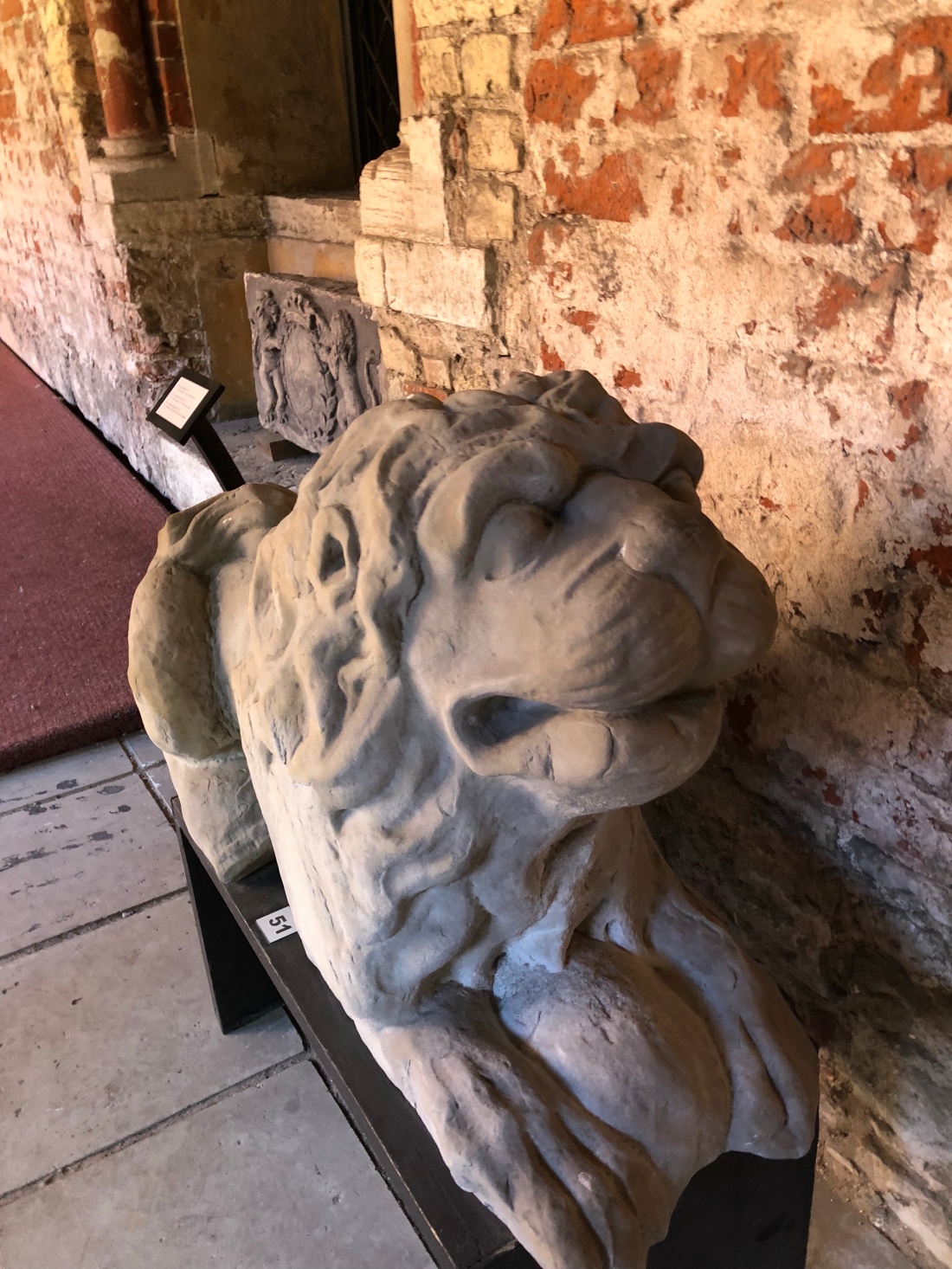 After some consoling and apologising, we realised that her slight overreaction was probably due to hunger, so we marched ourselves off to an open air restaurant, in which a woman was singing live accompanied by a piano.  We sat in glorious sunshine, Ian with a beer, and enjoyed a tasty lunch, feeling completely relaxed.  None of us particularly wanted to leave, but we still wanted to explore the Market …., so reluctantly, we paid up and pootled across the river to the great market place. 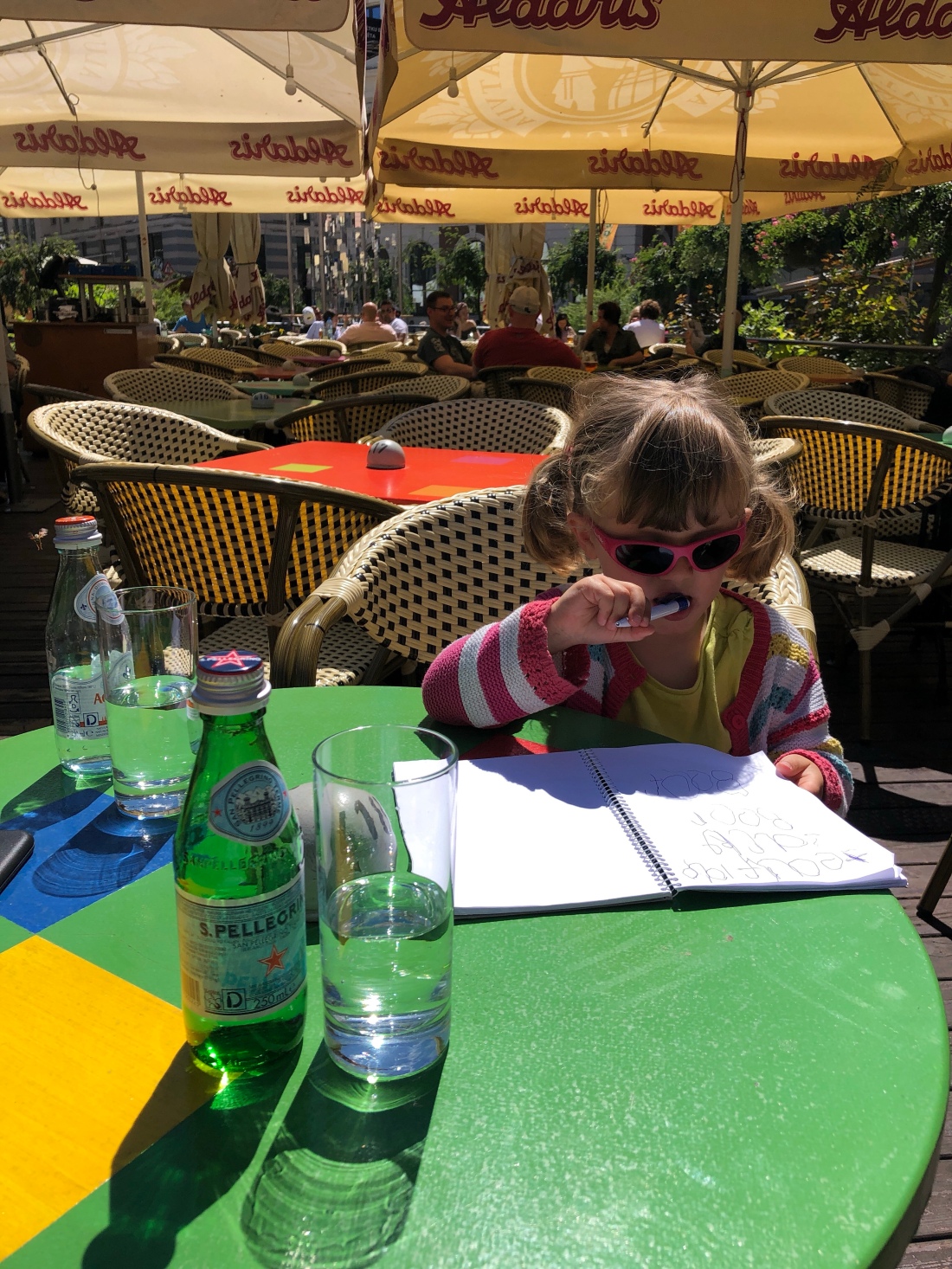 The plaza was full of stalls selling tons of cherries, strawberries and blueberries, as well as every kind of vegetable.  It all looked amazingly fresh and appetising.  We bought a kilo of strawberries and Bugsy & I sat munching them while Ian nipped off to the cashpoint.  They were really delicious!

We explored the various market halls, again all full of fresh produce, this time mostly meats, fish and cheeses.  I don’t know how they all survive selling the same products at the same price, but it seems they do!  I avoided spending any money, apart from our obligatory fridge magnet, chosen by Cornelia, and we navigated our way back to the tram and back  home again. 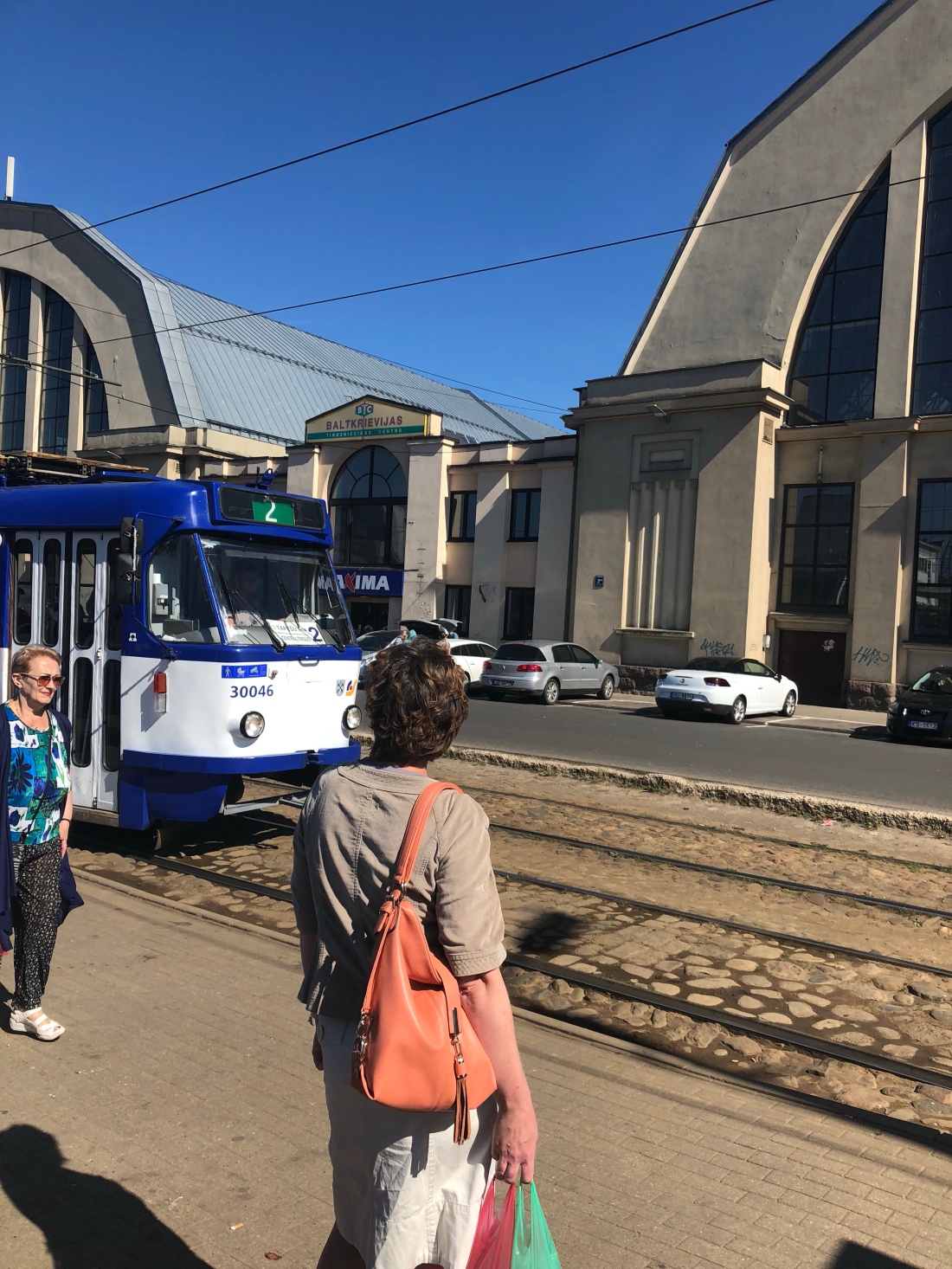 After a quick game of the treasure hunt (easily Cornelia’s favourite game, and I can’t recommend it enough!), we went out to a restaurant in a local hotel, which involved a slightly nerve-racking walk along a very busy road over the railway lines (made more harrowing by a short tantrum from the toddler who broke her promise to keep hold of my hand the whole way down the pavement).  Thankfully, we made it and dried off our sweaty palms, and managed to bag the last penultimate table in the restaurant which had been fully booked with a troop of people on tour together.  We were warned there may be an hour wait on food, but it would’ve taken us that long to find and get to anywhere else, so we used the time to WhatsApp Izzie to wish her a happy birthday, then go and investigate the various elephants adorning the hotel, including an enormous white plastic elephant, filling one quarter of the room!  Ian also spotted some extraordinary worms or caterpillars wrapped in bags of webbed silk, weighing down the branches of a tree outside.  We are still googling to find out what they were! 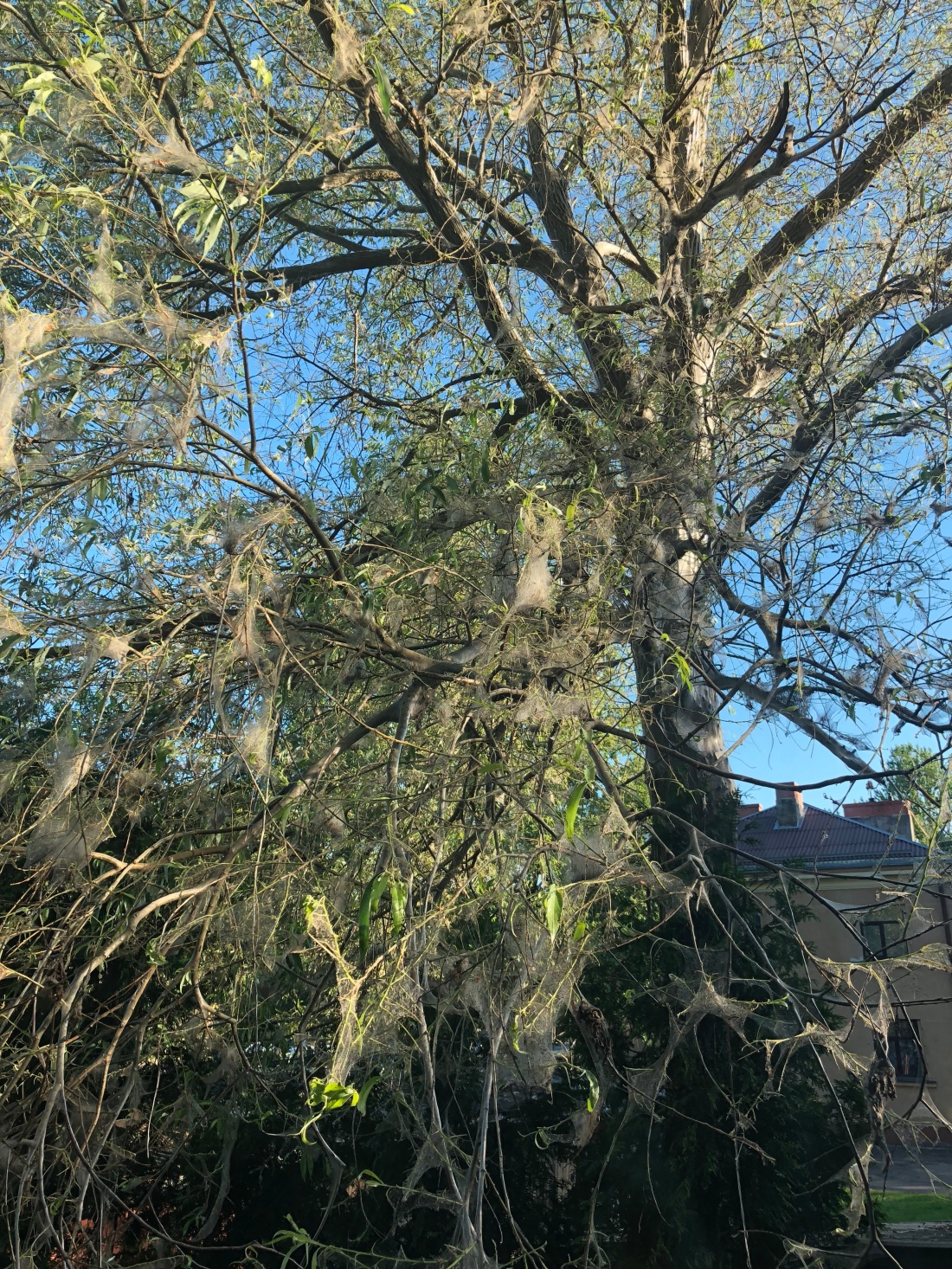 Dinner was tasty, but somewhat overcooked, which is a bit of shame, especially when it comes to lamb (which was my dish).  Nevertheless, it filled us up sufficiently that we didn’t indulge with a dessert, and actually we left moments too late, as Cornelia had a couple of meltdowns on the way out.  The first was in the restaurant, and she threw herself onto the middle of floor much to the amusement of the other diners (and me).  She has some staying power, and was there for nearly five minutes (lying quietly, thankfully!) before running back to me, remarking that one of the guests had tickled her on his way out.  (He had, but it was a good-humoured tickle, designed to cheer her up a bit.  She had thought it was me, but had had to smile when she realised it wasn’t!).

The second tantrum came when we were talking about The Smurfs (because “Strumpfi” which is one of her new Gang members, is German for Smurf, in case you were wondering) and I’d said to her that if she went to bed nicely tonight, I’d download The Smurfs for her to watch in Bluebell tomorrow, as a special treat.  She decided that she wanted to watch it tonight.  And despite a very fair explanation, she did not like my answer, and once again threw herself down, this time onto the pavement.  Another patient five minute wait, and sure enough, she was running up to us, wanting to hold hands, but then, silly girl, she decided to pinch me and Ian for not letting her watch The Smurfs tonight, which now means I’m not downloading anything tonight…  Ah, she’ll learn! 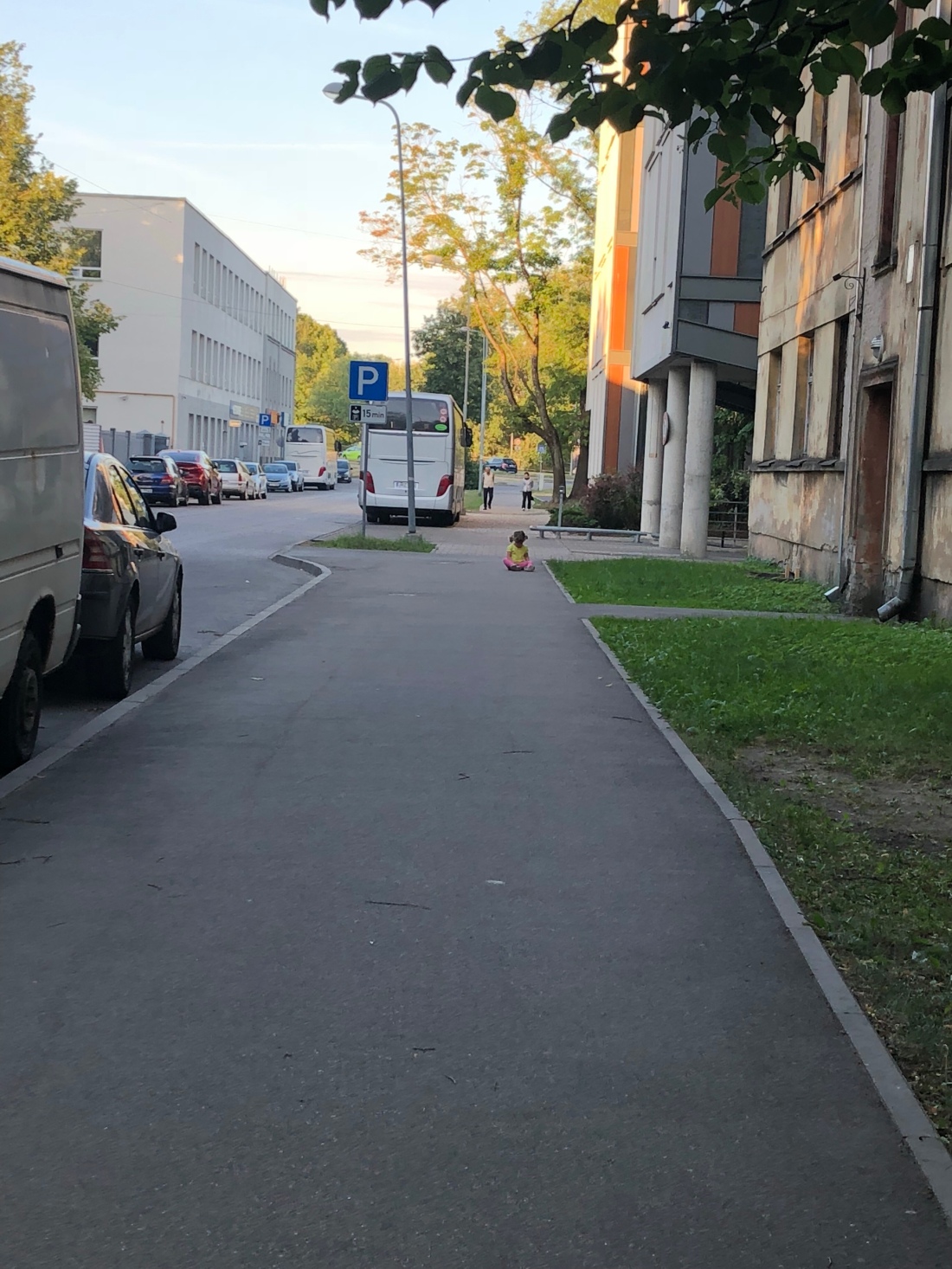 She managed to sort herself out for the rest of the walk home, and this time we avoided the busy road, instead opting to walk over the railway tracks instead.  Never did I think this would be the safer route!!  Bugsy had just about managed to hold onto one bedtime story (having lost all other treats today: ice cream, her one hour of Kindle time, and one of her two bedtime stories) and, thoroughly exhausted, she fell straight to sleep.  And all I have to do before sleep, is input all of our expenses to date, so we can see if we are still within budget.  I should’ve been doing it on a weekly basis, but all this bloody life admin is very time-consuming! 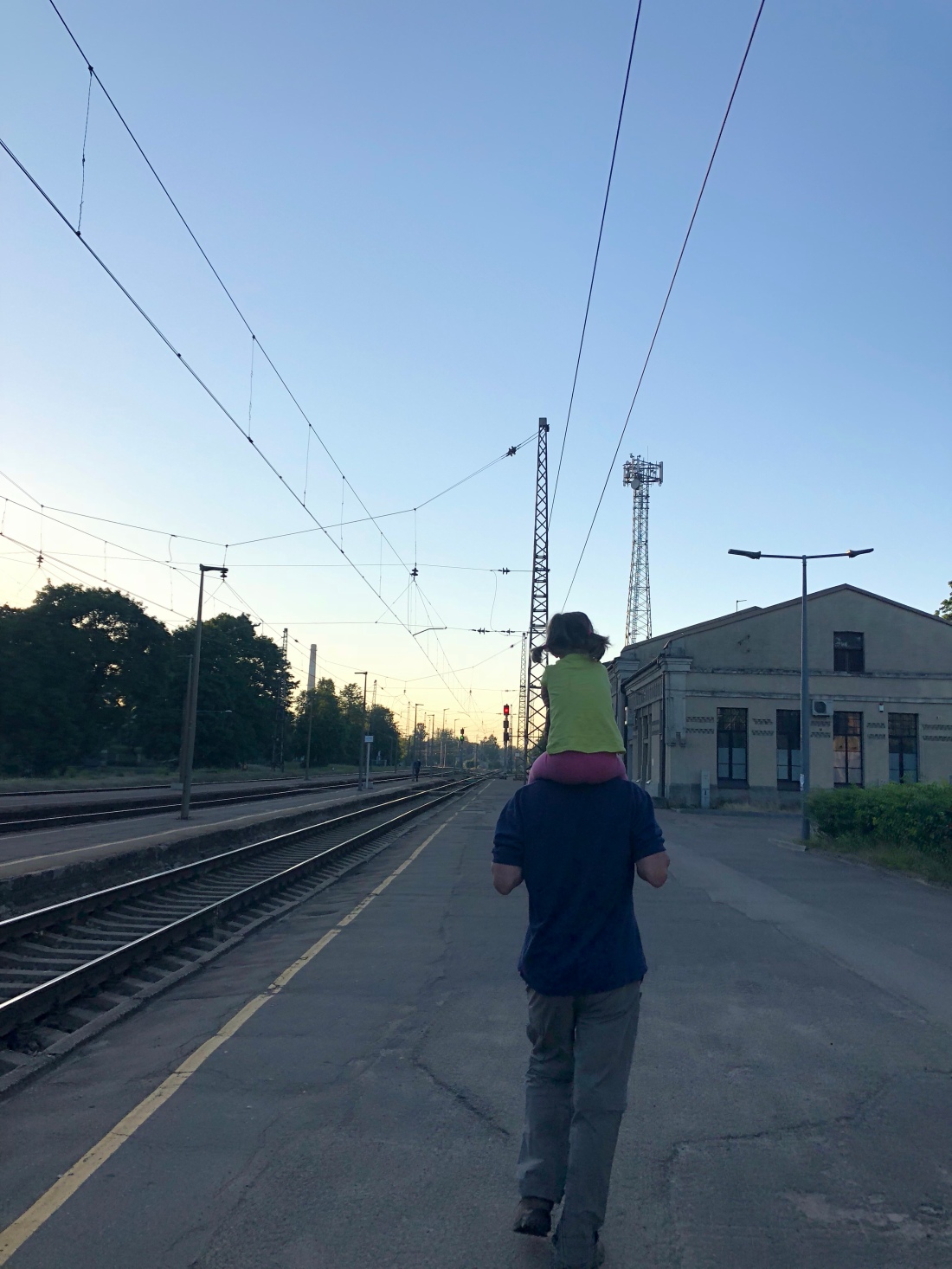