Eurgh, I was awake from 3am today, for absolutely no reason whatsoever.  On the plus side, there was a colourful sunrise that I wouldn’t have seen otherwise!

The first order of the day was a trip to the beach with her bucket and spade.  It’s the only opportunity Cornelia has had so far to build a sandcastle!  Ian and I were both happily surprised at the beach, with miles and miles of golden sand, and a warm breeze – really hadn’t expected that of Poland and the Baltic Sea!  The sea was warm enough to swim in, so I was annoyed with myself for leaving my swim kit back at the hotel, although truth be told, I could’ve easily nipped back for it, but opted instead for an hour lying down, listening to Ian and Cornelia digging a deep hole in the sand. 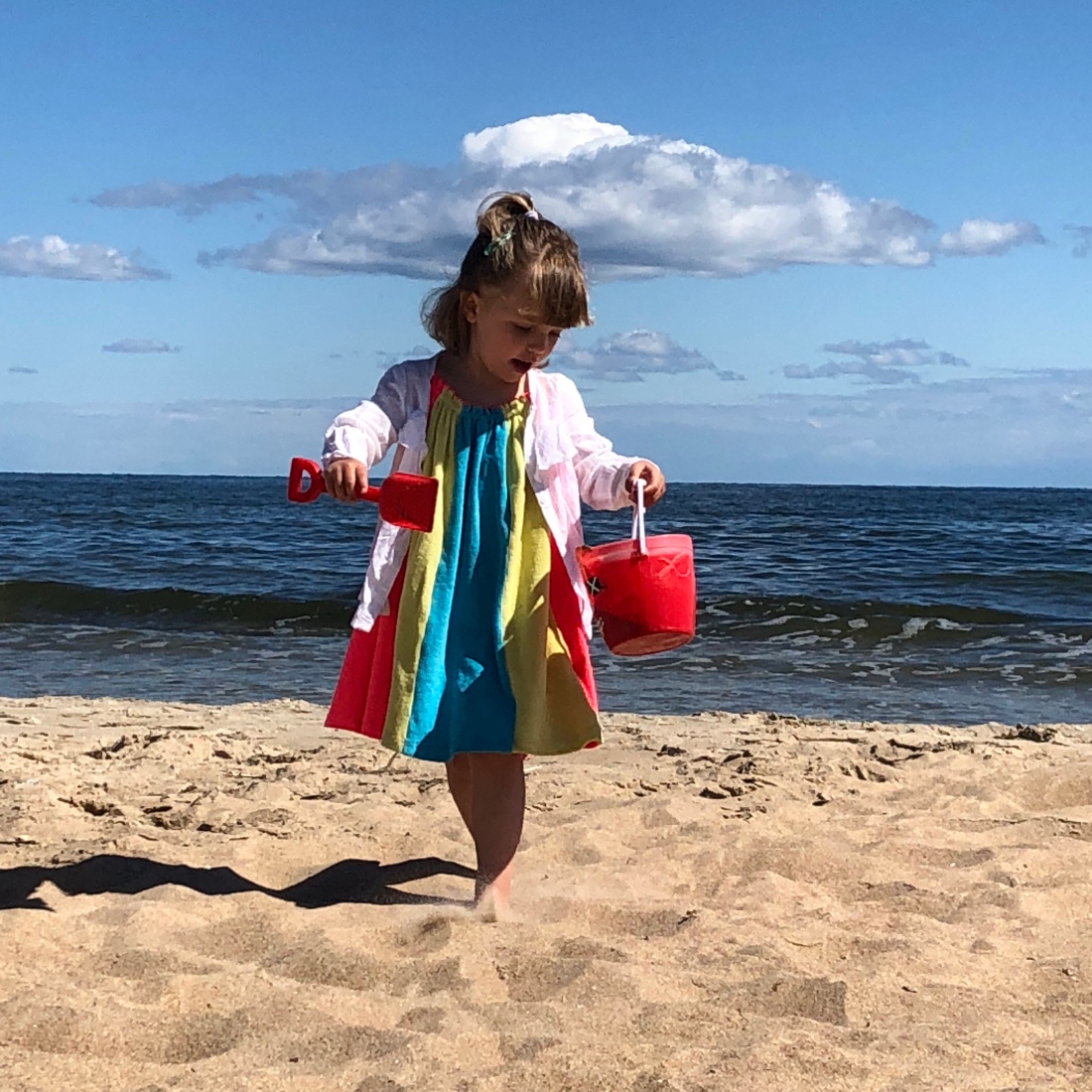 I had imposed a time limit on the beach, as if Bugsy had had her way, we would’ve stayed there all day, and today I was determined to see if I could find the place in Gdansk that a painting I had been given, which originally belonged to my dear grandparents, still existed.  Thankfully, there was no resistance when it was time to leave, and after rinsing off the sand in our apartment, we hopped onto the bikes for the cycle into Gdasnk.

The city initially was unimpressive – a mass of dirty-looking iron structures and a lot of traffic – but then we rounded a corner and it was just as I imagined it might be.  The cobbled streets were lined with grand buildings, reconstructed since the war, but sympathetic to the original architecture.  Our first priority was lunch, so that Cornelia had plenty of energy for lots of walking (part of our determination that she shouldn’t be carried much any more) and we were slightly irritated that after a long wait to order, we were told that they were only serving pizza, which none of us particularly wanted.  Sometimes, these things turn out for the best, because we found another little Italian restaurant with incredibly friendly staff, which served delicious pasta. 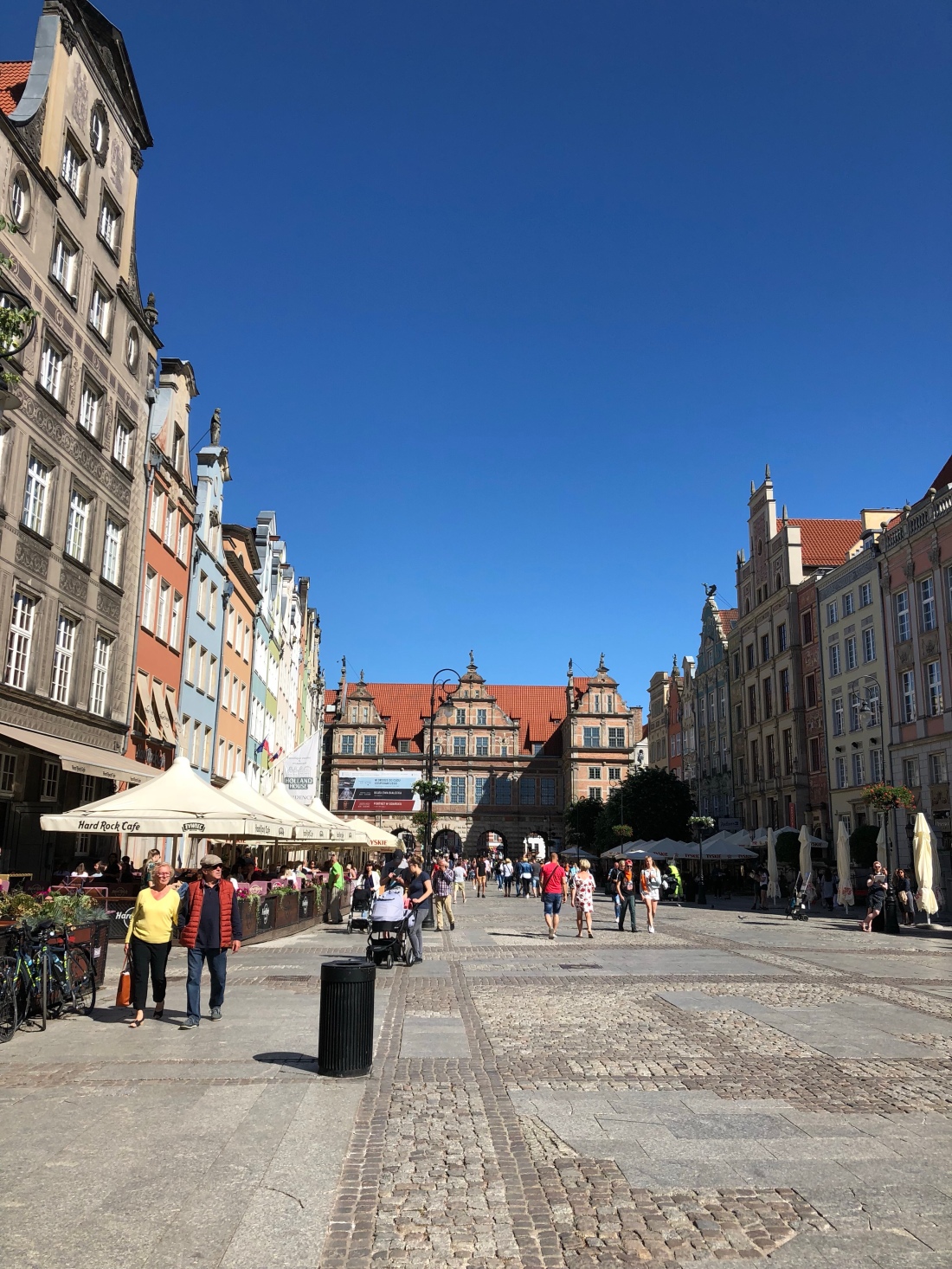 Tummies full and bikes locked up, we trekked down the main streets towards the river, in search of The Crane, which features in my painting.  Amazingly, as we passed through the arch that would take us to the riverside, a cellist was playing “Speak Softly Love”, our wedding song, which we had also heard being played in Timisoara!  Bugsy was more than happy to drop some coins into their collection pot, and this generosity continued as she danced freely on the pavement where a smiley chap was playing his guitar and singing loudly, much to her delight!

We knew where The Crane was now, but had to weave our way up and down the walkways to make it over to the right spot.  And then there it was!  Almost an exact replica of my picture in real life!  I’m not embarrassed to say I shed a tear in memory of my extraordinary grandparents, whose family (on my Grandpa’s side) originated from Danzig, as it was then known.  I took a few (thousand!) photos, and stayed a while just to savour the moment, and wished that my cousin Jane, who had done all the research into our family history, was here to share it.

The afternoon was disappearing quickly, and there was still so much to do, but alas, as I said yesterday, there are certain constraints and considerations when you are with your young daughter.  She had been absolutely brilliant, walking a really long way, and not asking to be carried at all.  In fact, Ian ended up offering her a shoulder ride (Mummy rolled her eyes at this…) so we could make quicker progress.

Gdansk is strange in that it was a mass of ongoing construction, partly restored to its original splendour, and partly modernised with its “Gdansk Eye” and sharp-edged hotels.  The marina is full of expensive little yachts, which are moored alongside tacky tourist pirate ships which sail up and down the river.  The city was awash with school children too, identifiable to their teachers by their matching baseball hats! 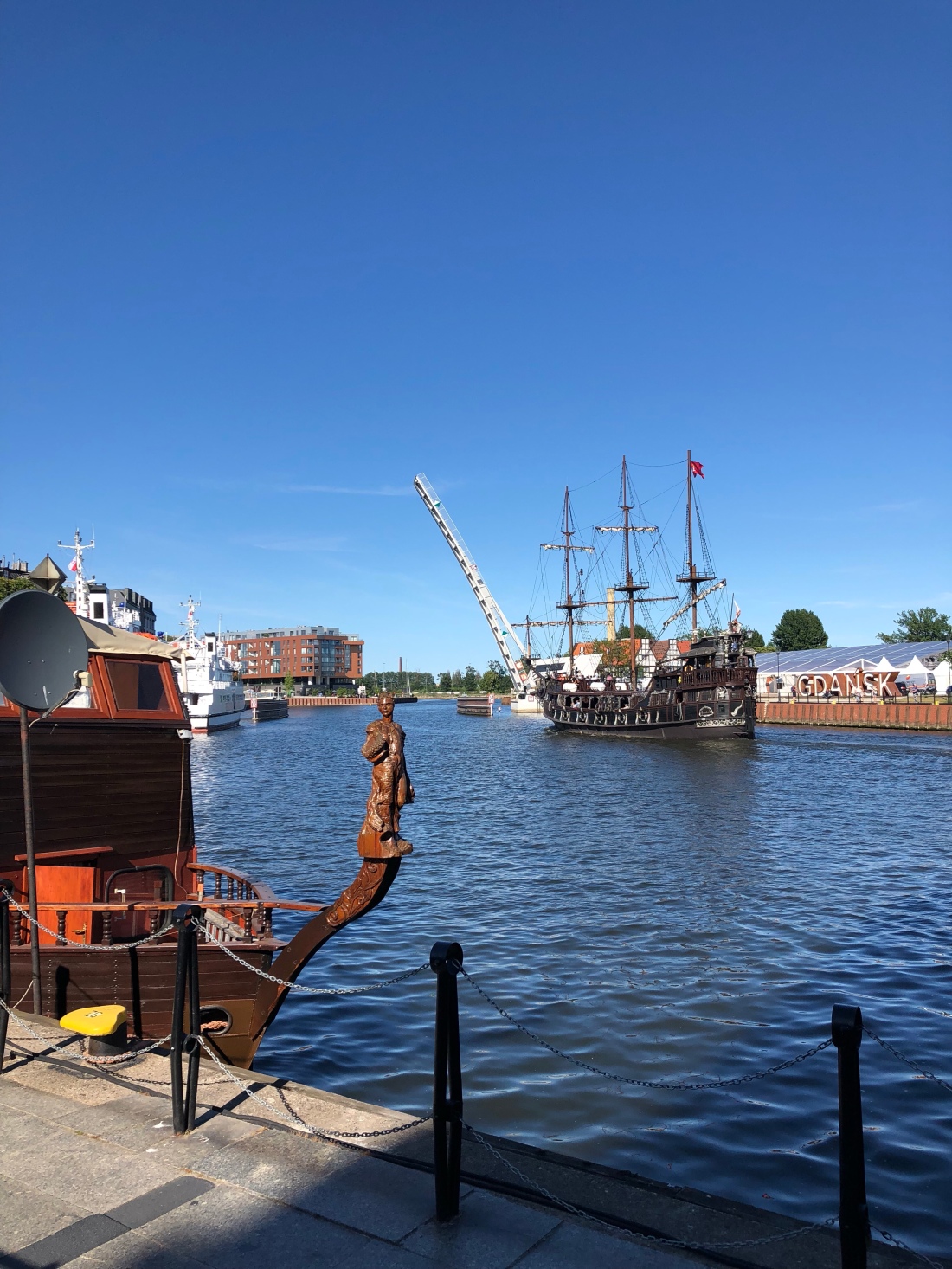 The sun was getting lower in the sky as we stopped briefly for an ice cream (a bit of a theme, I’m afraid!) and it was getting cooler, so we cycled back to our beachfront, and found a different restaurant for supper.  It was quite smart and I think they were quite surprised when we rocked up in our shorts and dishevelled toddler.  But the food was delicious (I had seabass cooked with rice noodles and coconut cream and an array of different herbs and spices), and Ian and I shared a bottle of wine between us (largely because we weren’t speaking to each other at this point, having had a peculiar falling-out earlier, so getting slightly drunk seemed like the sensible thing to do…) and, after a session in the play park with Cornelia, we wobbled back on our bikes.  I even managed to catch the sunset that day too – it’s not often I’ve seen the sun rise and set on this trip!