To my great surprise (and slight horror!) Cornelia woke up just after 7am, one of her earliest starts of the whole adventure so far.  I was in shock, as she hadn’t gone to sleep until after midnight, having stalked me between my bedroom and her bedroom for what seemed like hours!  Anyway, she was perfectly cheery, and after the usual bowl of porridge, we packed up and were ready to explore Poznan for a few hours.  Helpfully, Wojciech, our apartment host, agreed to pay for our parking ticket as the silly old Mobilet App wouldn’t let me buy one online because I didn’t have a Polish telephone number.  Anyway, Bluebell safely ticketed until 13:00, off we went.  All the way downstairs to the van, which had already received a penalty notice!  I rang Wojciech immediately, who promised he had bought the ticket at 08:07, so there was absolutely no reason we should’ve received a fine at 09:52.  He was good enough to say “Don’t worry, I will sort it.” and, trusting soul that I am, left it at that.  He seemed to think that it was a case of the traffic warden not checking the electronic records as it was a British vehicle, but in any event, he said that he would rectify it.  Phew.

Mini drama over, we then had about a mile to walk until we reached the Old Town Square which is number 1 on Trip Advisor’s “things to do in Poznan” list.  Cornelia whinged and whined the whole way wanting to be carried.  I completely refused this – she wasn’t tired, and she was chasing a chocolate ice cream, so I told her she needed to use up the energy if it was going to be replaced with ice cream!  This seemed to do the trick, but it was still a mighty struggle to go too far without a demanding “Carry me!”. 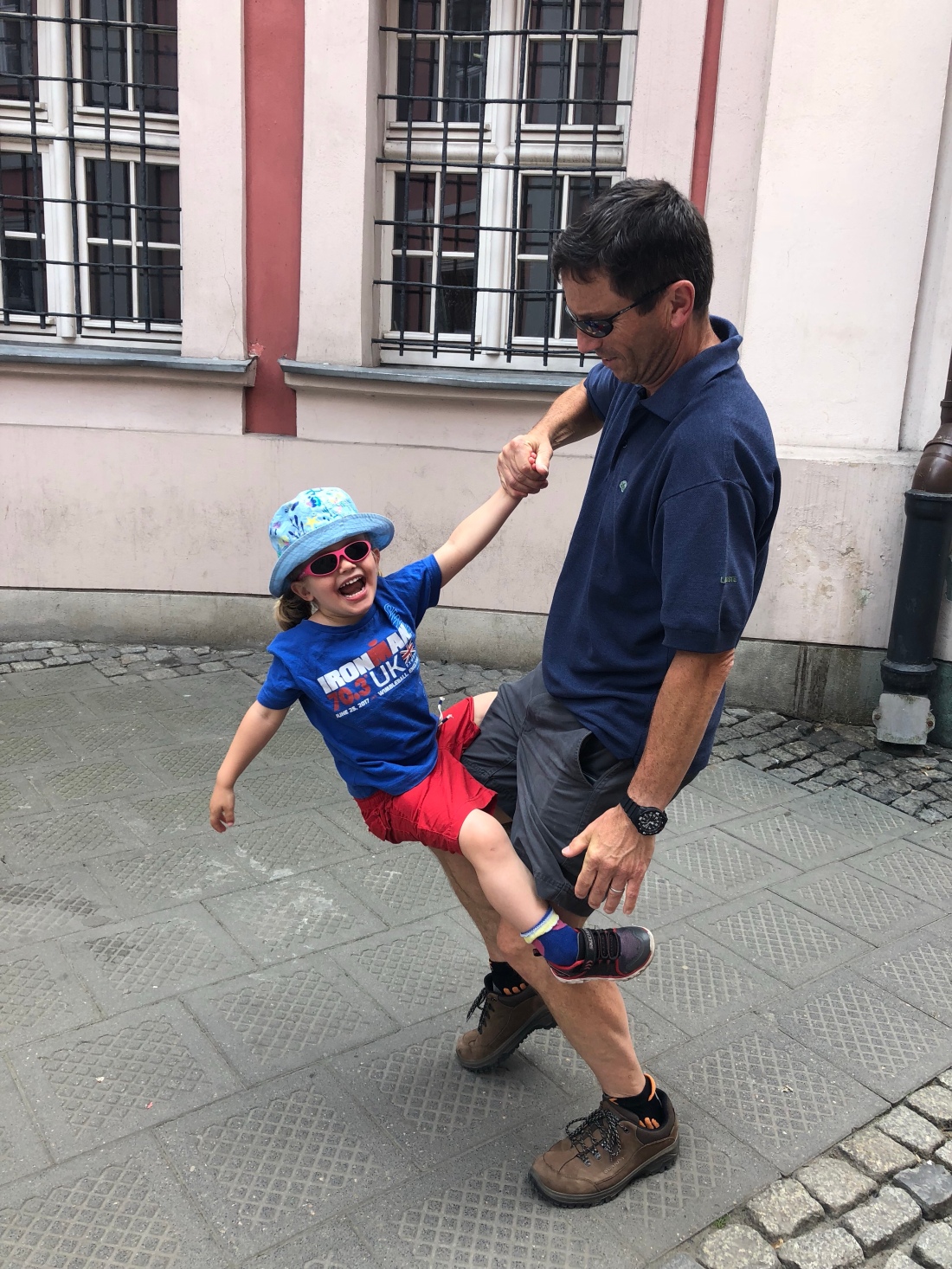 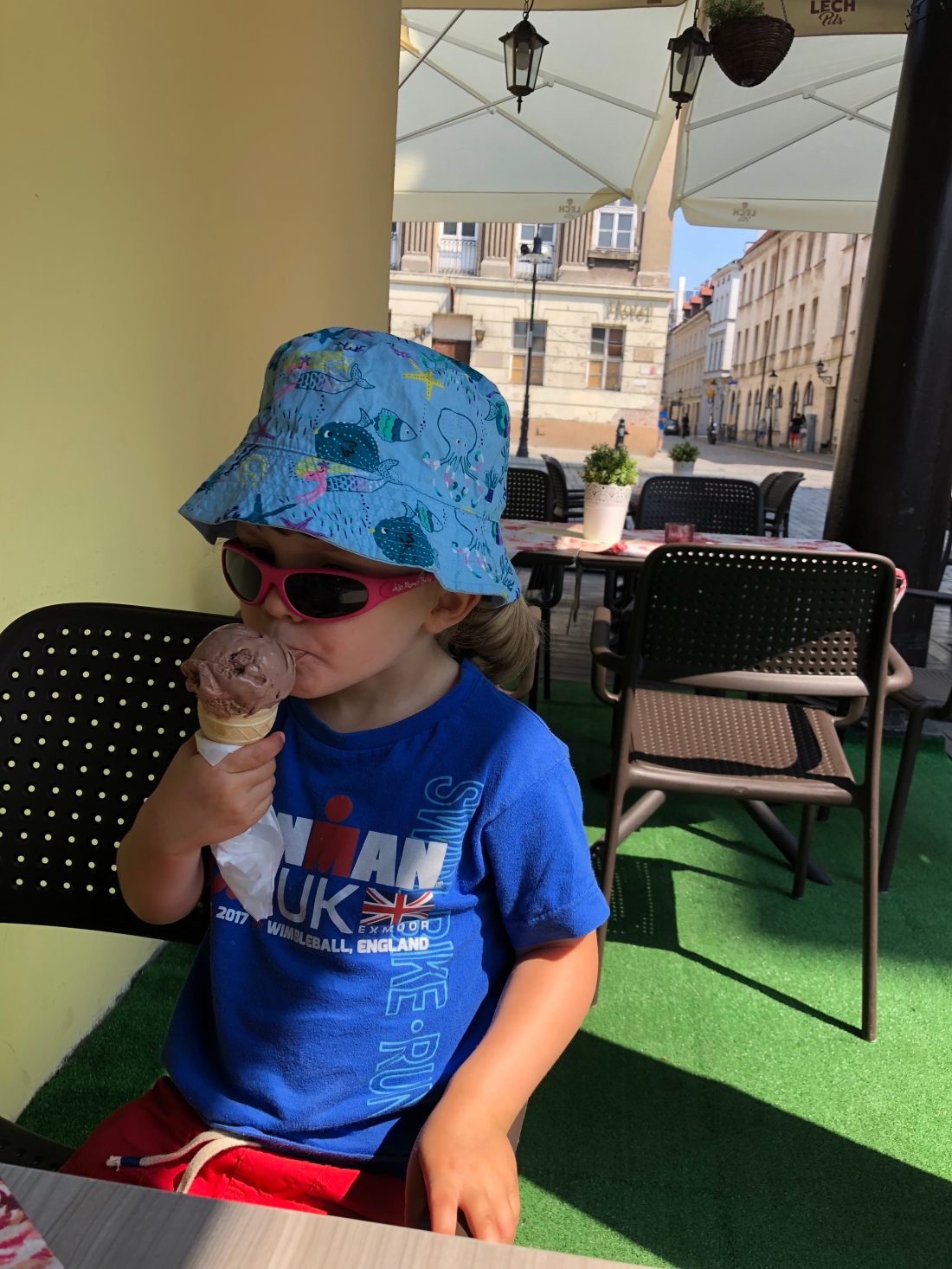 Anyway, we did reach the Old Town Square (and enjoyed the promised ice cream) and well, what a magnificent place it is!  Having been annexed by the Germans in WWII, after a month of fighting to oust them in 1945, up to 90% of the Old Town was destroyed and had to be rebuilt.  But the buildings that remain are quite extraordinary and beautiful, and those that have been reconstructed have remained true and sympathetic to the originals, so far as they are able.  The whole town of Poznan feels “spacious”.  The roads are artistic and geometric somehow, surrounded by architecturally outstanding buildings with piano music or opera singing bursting through open windows and adorned with plenty of historical monuments. 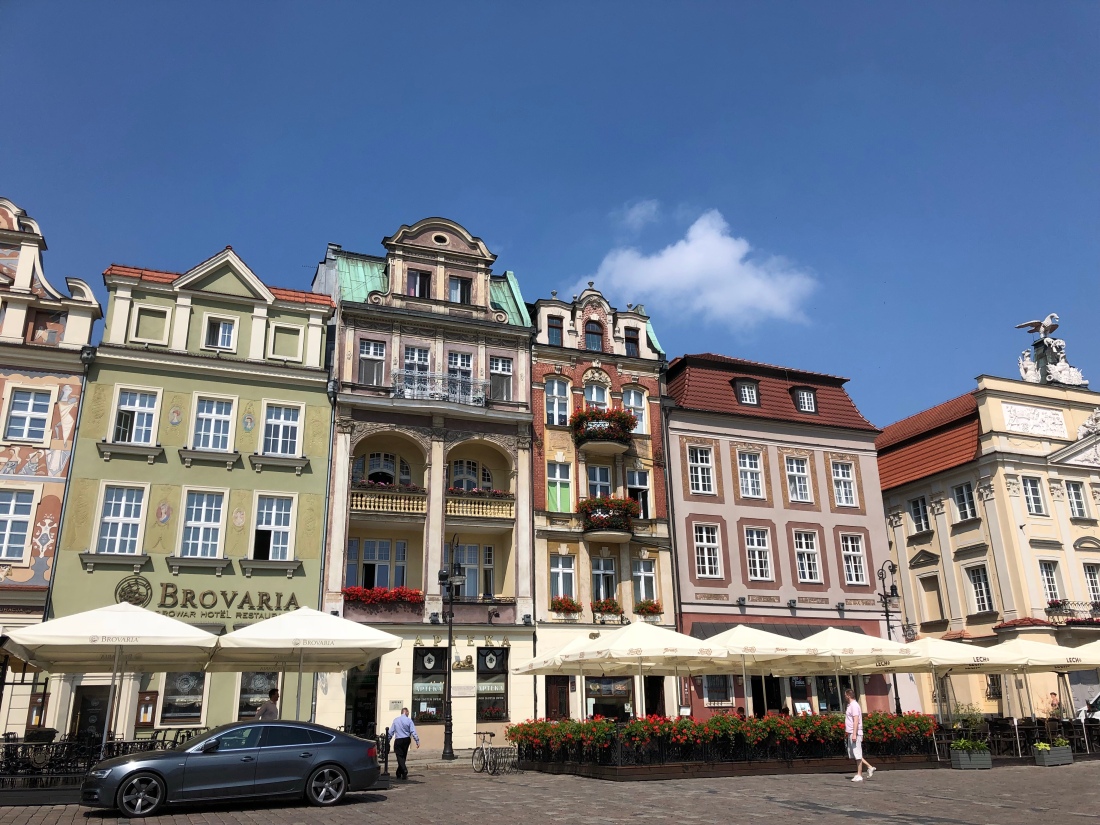 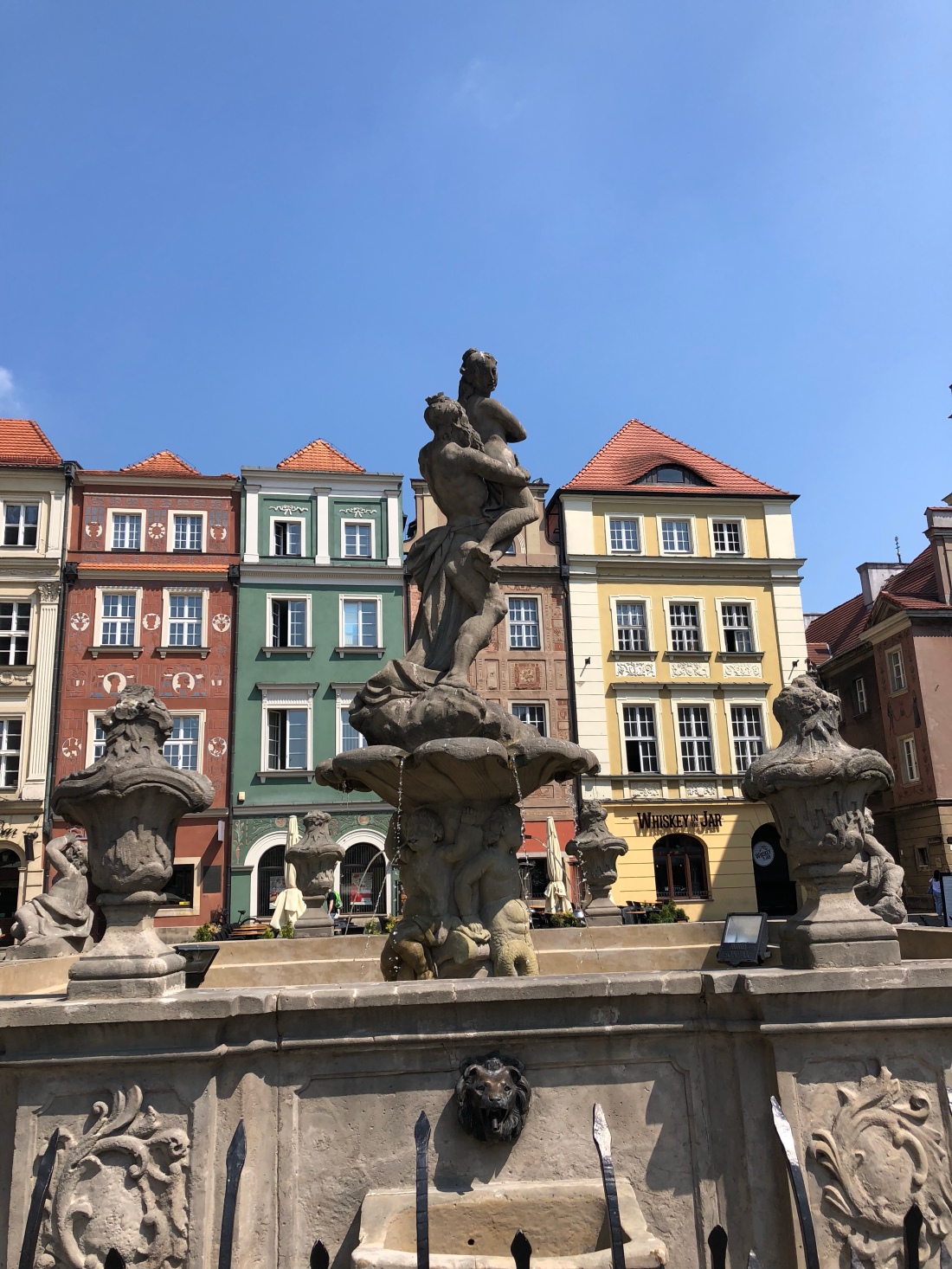 The Old Town Square houses the Town Hall, where we waited patiently as the crowds gathered, for the midday clock to chime.  At noon, two mechanical billy goats come out of the little wooden doors above the clock near the top of the building, then they butt each other twelve times, before retreating, while a bugler plays the town’s traditional bugle call from the balcony.  It is all strangely absorbing!  Directly outside the Town Hall is the original whipping post, but thankfully, everyone was on their best behaviour, so no threats were made (although an enterprising entertainer set up in front of the post-goat hordes and performed a series of extraordinary basketball juggling tricks, much to the pleasure of Cornelia).

After the excitement of the midday headbutting goats (and after the disappointment of discovering the museum inside the building was closed on Mondays), we enjoyed a tour of the Castle Quarter by electric buggy, which took in some of the town’s other historical features, including the Freedom Fountain, the Great Theatre, and the University (where it was graduation day for the medical students). 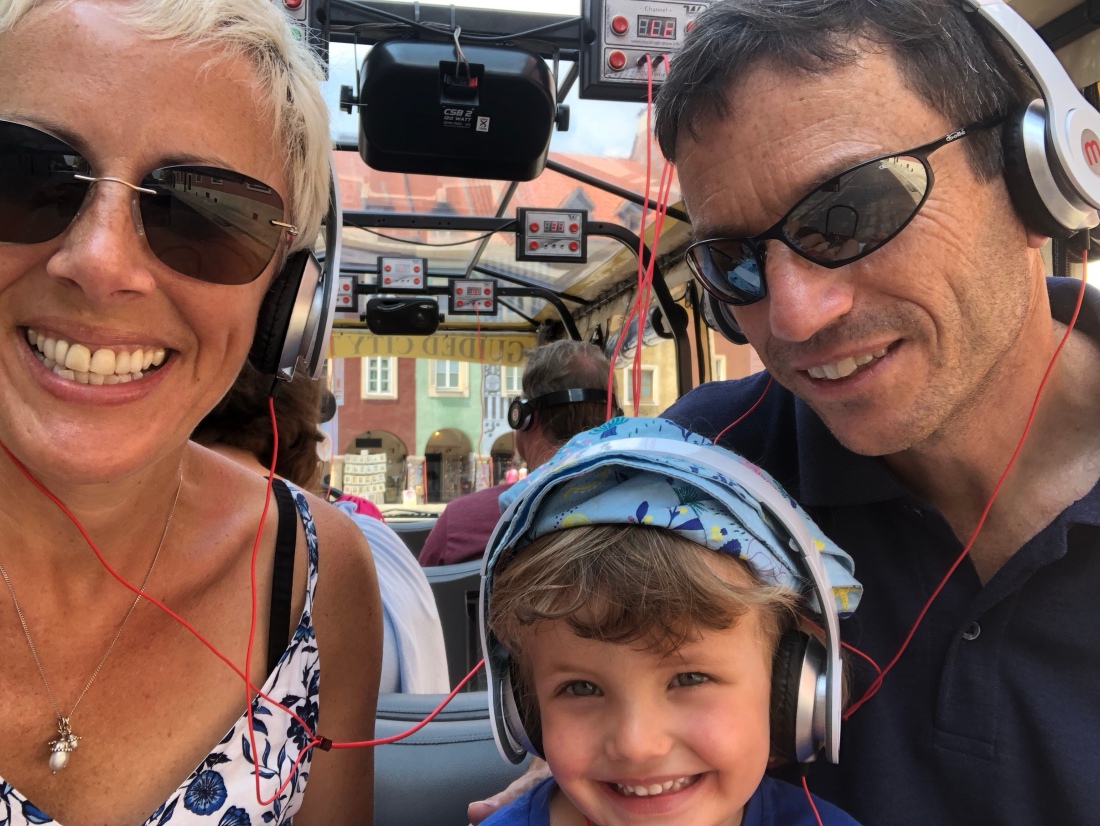 We were, sadly, on a time limit, as our parking ticket was due to expire at 13:00, so having been dropped off near our street by the electric buggy, we raced to the van to see if we’d received another ticket.  Thankfully not!

We navigated our way out of Poznan with no problem, and headed off to Gdansk, from where my family originates.  It has a fascinating history for me, all revealed by my wonderful cousin, Jane, who has done some extraordinary research in respect of our family history, including the discovery of some new relatives, who are already incredibly special to me.

En route to Gdansk, we stopped off at one of the many “service stops”, which are basically loos and picnic tables.  It was strangely lovely!  There were only two other cars there, and a single slide and one other bouncy thing for kids, and loads of sheltered wooden picnic tables and benches.  We saw a couple of very long cargo trains pass by in the distance (we counted 40 carriages) as we ate our sandwiches in the warm breeze.  It was all rather enchanting! 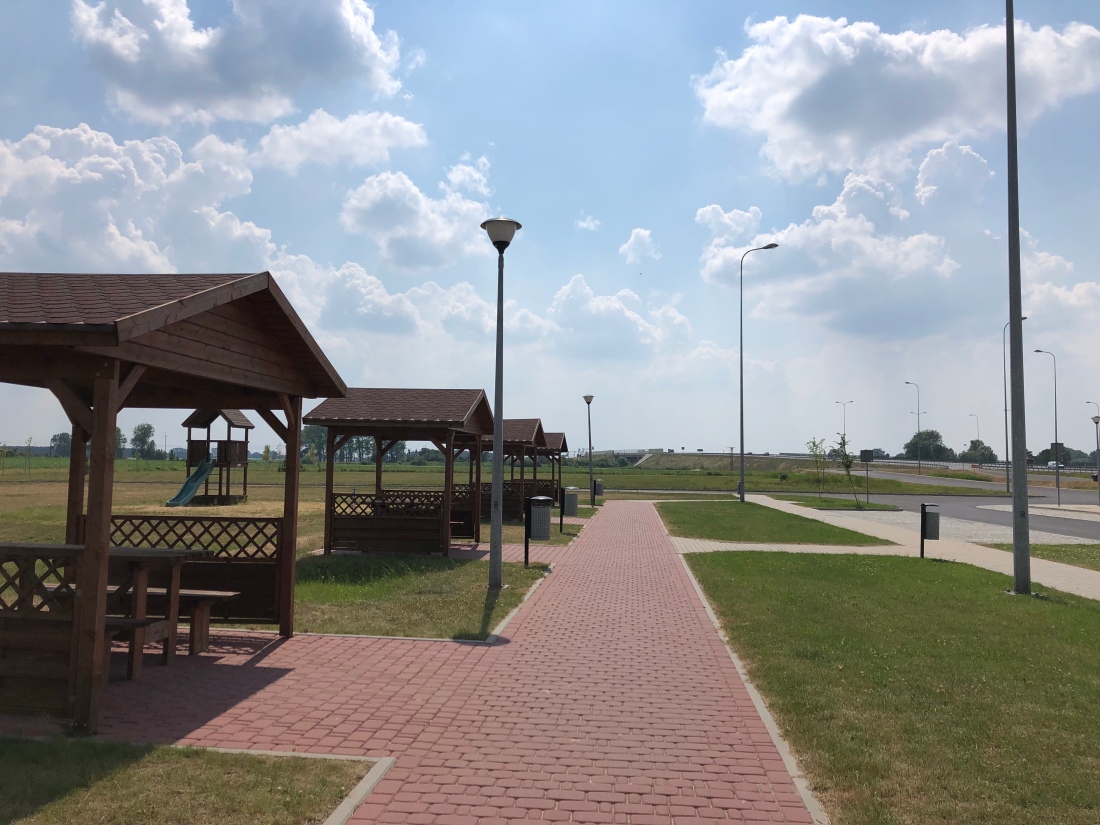 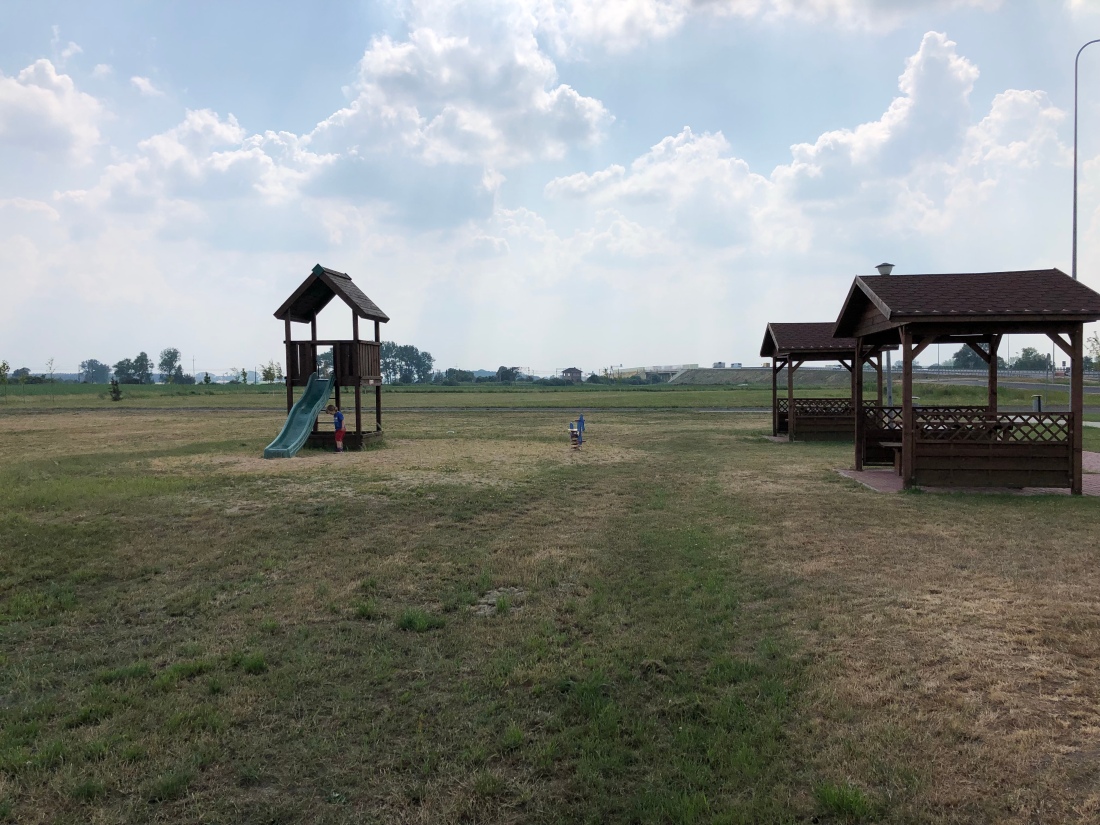 We arrived in Gdansk without incident, and are in love with our hotel.  We treated ourselves to a big apartment, on a hotel complex, and have decided already that we will stay three nights instead of two!  I had managed to keep Cornelia awake all through our five hour journey, and despite being a bit tired, she was in good spirits and ate her tea in the restaurant beautifully, before having a bath and going to bed with no argument whatsoever.  Keeping her awake during the day is definitely the key to a simple bedtime! 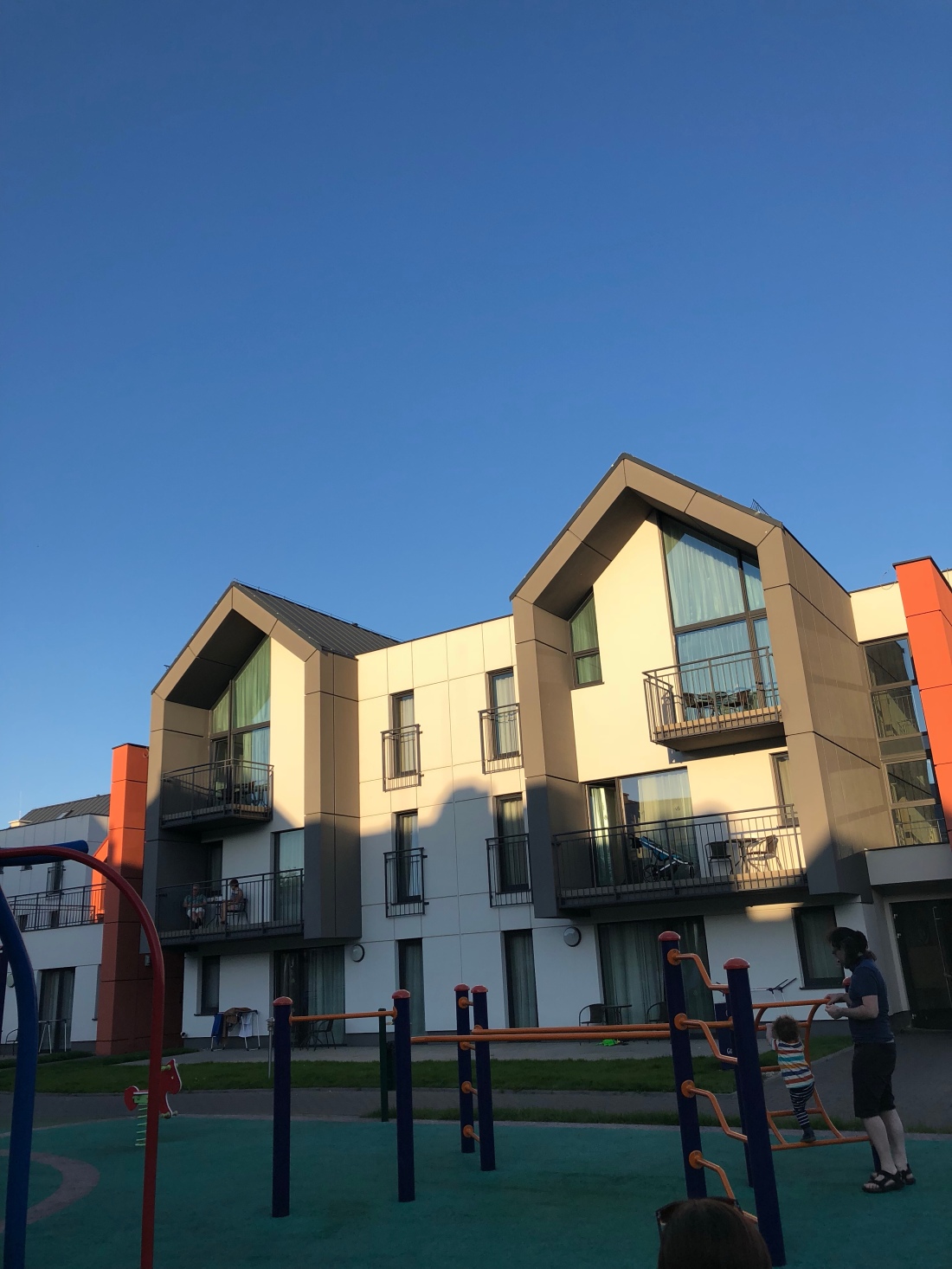