Bugsy slept off any bad mood from the previous night by not squeaking until about 09:30, then waking up in a brilliant mood. She asked for breakfast out on the balcony in the morning sunshine and ate her Cheerios happily watching the construction works that we’re going on around us. (And had been since early morning…!)

After a quick game of hide and seek in the huge apartment, we checked out (by just posting our keys and car park card into a postbox) and went for a wander around Budapest, with Cornelia in the piggy back machine. Ian had researched the best places to visit and top of the list was Fisherman’s Bastion, which was about a mile or so away. Neither of us had been for a run, were happy to enjoy the exercise stomping along the streets.

We swung by the Budapest Eye which is similar to the London Eye, but as it was ferociously hot, we all agreed it was probably best to give it a miss!

The streets are heaving with tourists (including us, of course!) which somehow surprised us both. We loved the walk over the Chain Bridge linking Buda and Pest with two large lion statues guarding each end of it, and up to the funicular and of course, Bugsy was delighted to be getting another ride up a hill.

While we were queuing, we were treated to a brief military equestrian display, with four horses parading elegantly and their riders smartly-uniformed. And to Cornelia’s peculiar delight, they were carrying swords!

Once at the top of the funicular, we were unsure where to go, as the navigator’s Google Maps were wreaking havoc on his directions, but we followed our noses up a discreet little slope and steps and as we came out through an archway, it was clear we had found Fisherman’s Bastion! It was swarming once again, but what a view from the ancient fortress! It was a huge area, and we followed the herds round all the corners with stunning vistas from all sides. 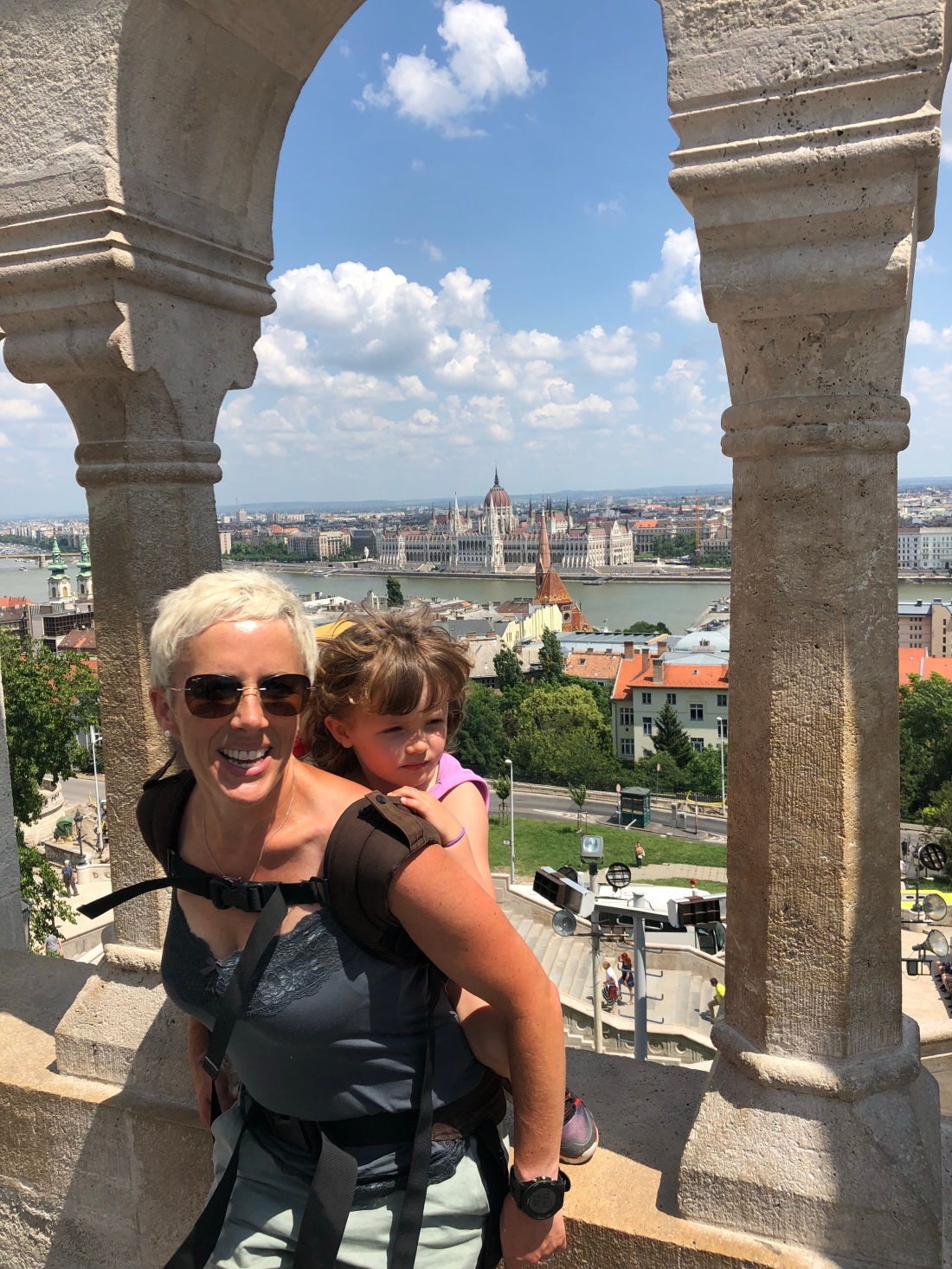 We had lunch in a lovely little cafe on the terrace where Cornelia experienced her first chicken burger (and enjoyed it after the initial horror of having melted cheese in it!). I had a delicious goats cheese salad and Ian went for Hungarian goulash soup.

After lunch, it was time to get on the road again, so we sweated our way back to the car park via the ice cream shop, only to discover we couldn’t get out because we needed our car park card that we had already posted back that morning. I was quite certain that the receptionist had said the barrier would automatically open on exit but it was not the case. Ian parked up again while I rang the apartment reception and then legged it up through collect the exit card again. Phew! It had been a bit of a risk leaving the van in their car park after we should’ve left at 11:00, but luckily we weren’t charged and finally managed to escape. As you can imagine, Ian wasn’t at all stressed… 😳

From Budapest, we were heading for a small village outside Bratislava to stay with David Warmington and his teenage daughter, Grace. Sue, his wife, is Ian’s best mate’s sister, and their mum, Jill, had suggested we could stop off to see them. Unfortunately, Sue was in Hong Kong, but David was the most welcoming host, and poor Grace was immediately idolised by Cornelia who didn’t let her out of her sight the whole time we were there!

On arriving, Grace was about to take their three dogs (Saffy, PeeWee and Milo) out for a walk, and Cornelia being her usual assertive self just marched up to her, took her hand and asked if she could go with her! So off they went!!

David was busy cooking supper which was such a treat. A delicious meal, a cold beer, great company and a happy toddler… who could ask for more?!